Ecuador’s interest in Antarctica goes back to 1967, with an official declaration by the National Assembly of the country’s rights on the southern continent. Only 20 years later, the country decided to accede to the Antarctic Treaty and to participate in keeping Antarctica as an area of peace and science. Preparations began immediately through the Navy to carry out the first Ecuadorian Scientific Expedition on board the R/V Orion, a modern oceanographic vessel built in Japan for the Ecuadorian Navy and operated by the Navy Oceanographic Institute. Since then, Ecuador has conducted 21 expeditions and built, in 1990, a summer scientific station (Pedro Vicente Maldonado Scientific Station, honoring the first Ecuadorian geographer). The station is located at Fort William Point,Greenwich Island, South Shetland Islands, just three miles north of the Chilean Arturo Prat Base.  A refuge is also available to explorers at Hennequin Point, Admiralty Bay, King George Island, among the research stations of Poland, Brazil and Peru. In the long-term, Maldonado Station will become a year-round facility within the next five years.

In parallel with the expedition preparations, the government created official entities to deal with Antarctic issues: on one side, the Ecuadorian Antarctic Program (PROANTEC, Spanish acronym) was in charge of Antarctic matters and the logistics of expeditions and Antarctic research stations. On the other side, the Sectorial Commission on Antarctic Research, created by the National Scientific and Technology Council, helped deal with Antarctic Science.  An Executive Secretary directed both entities. Later on, according to Executive Order No. 1610 in May 2004, the Ecuadorian Antarctic Institute (INAE, Spanish acronym) under the authority of the Ministry of Defense, took over the tasks of the former programme PROANTEC. This way, Ecuador has a solid national structure and the government funding through the annual budget to deal with the participation, promotion and scientific research within the context of the Antarctic Treaty System.

The Sectorial Commission on Antarctic Research is now the Scientific Advisory Group. This Group coordinates with INAE through the Technical Scientific Direction and it is responsible for the planning, preparation and execution of the annual scientific programme.

Initially, most of the science was done in the Bransfield Strait, with projects related to surface circulation, water mass distribution and associated biodiversity. Because R/V ORION has not been available in subsequent years, research projects focus mainly on the ice-free areas of Fort William Point and the Dee, Torres and Barrientos islands, and in the Chacon and Discovery Bays. Projects include research on beach geomorphology, glacier behaviour, wind driven circulation, bay hydrodynamics, mapping using GIStechniques and tourism path studies on the Barrientos penguin colony, among others.  Ecuador is committed to aligning its new science vision with the high priority questions, identified by the 1st SCAR Antarctic and Southern Ocean Science Horizon Scan, that Antarctic scientists should answer in the coming decades. This needs the strong commitment of researchers in the near future. 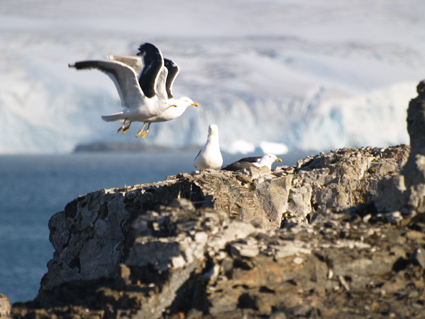 Ecuador has gained experience in managing protected marine areas, for example in the Galapagos National Park and the Galapagos Marine Reserve. This experience can be translated to Antarctica to reduce tourism impacts by visiting places within the Aitcho archipelago of the South Shetland Islands.

Scientists from other SCAR member countries have been included in most of the recent expeditions in order to support networking and achieve better results. A good example is the cooperation with researchers from Malaysia and coauthoring papers in the ASM Science Journal edited by the Academy of Science Malaysia.

ECUADOR Antártico is the official magazine edited twice a year by INAE and can be viewed and read on INAE's Revista Ecuador Antártico page.

For more information on Ecuadorean research in the Antarctic, please visit the INAE website.