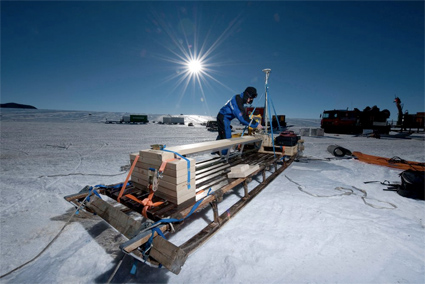 Norwegian activity in the southern Polar Regions began in 1892 with ship owner Lars Christensen’s Jason expedition led by Captain C. A. Larsen. Norway was also particularly active during the heroic age of the explorers, in which the achievement of the Norwegian Roald Amundsen and his team in being the first people to reach the South Pole on 14. December 1911 is well-known to many. Norway has since continued its interests in the frozen continent through its engagement in assuring the preservation and protection of Antarctica. Norway was, due to its active participation in IGY, among the original signatories to the Antarctic Treaty and one of the first 12 countries to form the Scientific Committee on Antarctic Research in 1958. Norway played an active and important role in the preparation of the Proto­col on Environmental Protection to the Antarctic Treaty, signed by the Antarctic Treaty Parties on 4 October 1991.

Norway’s recent Antarctic facilities include Troll station in Dronning Maud Land, a year-round facility that was first established as a seasonal station in 1990, then upgraded to a year-round station in 2005, and the 3000-m-long Troll Airfield. A small additional field station, Tor, is used for ornithological studies. They have also reestablished their station on Bouvetøya, an island between South Africa and Antarctica, which is the base of operations for a CEMP seal, penguin and bird monitoring program that started in the mid-1990s. The ice-strengthened vessel Lance has been used for research in polar waters since 1994. Norway is in the process of building a new national ice-strengthened research vessel, Kronprins Haakon, that will be operative both in the Arctic and the Southern Ocean from early 2018.

The Norwegian Polar Institute (NPI) is tasked with coordinating the Antarctic activities within the fields of scientific research, mapping and environmental monitoring. NPI provides logistic support for the national research effort in Antarctica, and is responsible for the station facilities. The Institute also advises Norwegian authorities in strategic and thematic matters relating to the polar regions, represents Norway internationally on various arenas and is Norway’s competent environmental authority in Antarctica.

From as early as the 1920s and 1930s Norwegians conducted research in Antarctica through Norvegia expeditions, and later through the Maudheim expedition in 1949-52 and IGY activities in 1957-58. From the 1970s to the 1990s, the first NARE expeditions (Norwegian Antarctic Research Expeditions) were con­ducted by the Norwegian Polar Institute. Today Norwegian Antarctic research focuses on enhancing understanding of processes that govern climate and environmental change in the polar regions, and of their impacts on the natural environment and society. Norway also conducts topographic and geological mapping and research in Dronning Maud Land.

Robert Larter from the British Antarctic Survey received a SCAR Visiting Professorship in 2016 to spend time in Norway, being involved in strengthening their marine geoscientist training program. We are also very pleased that Norway has made an additional donation to the SCAR Visiting Professor Scheme for 2017 which will provide another opportunity for capacity building between SCAR member countries.