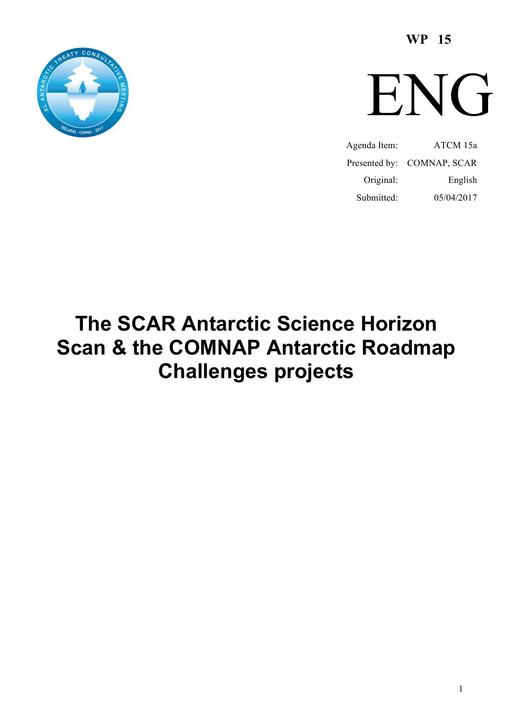 In recognition of the global importance of Antarctic research, the international community came together in an unprecedented effort to define the highest-priority scientific questions that can be uniquely addressed by studying the Antarctic Treaty region. In addition, the community assessed what it would take to enable the research necessary to realise the promise of Antarctic science at the dawn of the twenty-first century. The initial step was the first SCAR Antarctic and Southern Ocean Science Horizon Scan, which identified the 80 highest-priority scientific questions that researchers aspire to answer (see SCAR ATCM XXXVIII (2015) IP020). The 80 resulting research questions were called “A roadmap for Antarctic science” for the next two decades and beyond. The SCAR Horizon Scan project was followed by the COMNAP Antarctic Roadmap Challenges (ARC) project which was a community effort to determine the steps necessary to enable the science “roadmap”, that is, to answer those 80 critical questions. The ARC project reported on the technology, access, infrastructure, logistics, costs and levels of international collaboration that would be required (see COMNAP ATCM XXXIX (2016) IP051). Together, the outcomes of the two projects explicitly identify both the research priorities for the Antarctic region, and the requirements for delivering them.

This paper highlights the important outcomes of the SCAR Antarctic Science Horizon Scan and the COMNAP Antarctic Roadmap Challenges Projects and provides recommendations to the ATCM.