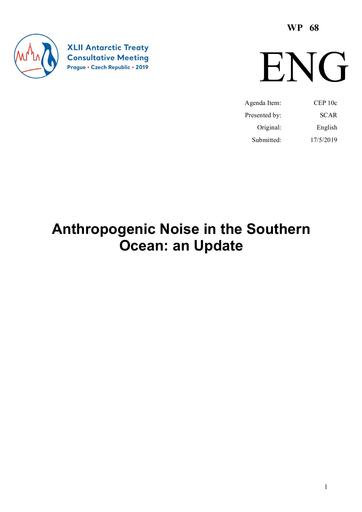 WP068: Anthropogenic Noise in the Southern Ocean - an Update

Scientific knowledge regarding the effect of noise on marine wildlife continues to advance, based almost exclusively on studies outside the Antarctic region. Despite these advances in knowledge, the state-of-knowledge regarding the spatial and temporal distribution of sound sources, the real-world characteristics and distribution of anthropogenic noise and the environmental factors that determine its effects on receptor organisms and/or populations, is judged by experts to be fair to good. How marine wildlife will respond to exposures to noise remains largely unknown with no information for many important species. While there is improved knowledge of the effects of noise on several cetacean species, there remains a lack of research on marine species endemic to Antarctica, including little knowledge of population level effects and variations in effects with life stage. Due to the lack of fundamental knowledge, current approaches to mitigation and management remain largely unverified as to effectiveness in avoiding and/or reducing detrimental effects. Expanded monitoring of natural ambient and anthropogenic sound in Antarctic marine environments is needed to fully assess real-world noise exposure scenarios. While at an early stage, identification of “sound-sensitive” Antarctic species, potential “sound hotspots” in Antarctica and cumulative effects are beginning to emerge. Further studies of the responses of Antarctic species and populations to anthropogenic noise are essential to advancing evidence-based policies that are practicable while achieving conservation goals.