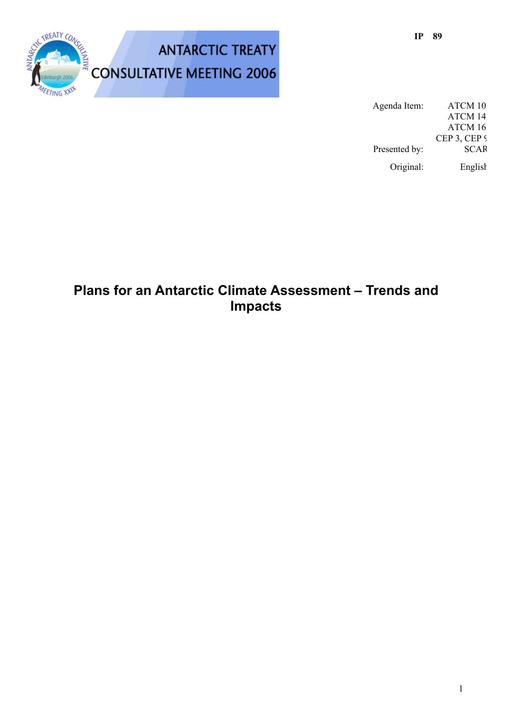 IP089: Plans for an Antarctic Climate Assessment – Trends and Impacts

Following the production of the Arctic Climate Impact Assessment early in 2005, the SCAR Executive Committee agreed at its meeting in Sofia (July 11-13, 2005) that a comparable and complementary assessment of the Antarctic should be produced for the guidance of policy makers in the Antarctic Treaty System and to inform the public. SCAR’s Executive Director and the Chief Officers of SCAR’s Standing Scientific Group on Physical Sciences and of SCAR’s Standing Committee on the Antarctic Treaty System were charged with developing an appropriate document, for presentation in due course to the Antarctic Treaty Consultative Meeting. It was agreed that the bulk of the work would take place through SCAR’s Scientific Research Programme on Antarctica in the Global Climate System (AGCS), led by Dr. John Turner of the British Antarctic Survey. The final draft of the report will be sent out for peer review prior to publication in the refereed scientific literature.

This plan is brought to the attention of the XXIX ATCM in the expectation that some Parties may wish to contribute to the Assessment in one way or another, and to stimulate debate about the possible direction that such an Assessment may take. We intend to form an international scientific steering committee, and would welcome suggestions for scientific participation in that committee.