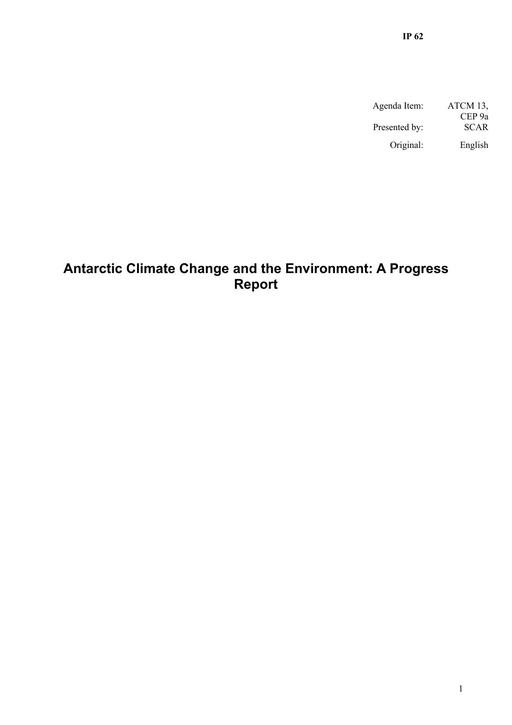 IP062: Antarctic Climate Change and the Environment: A Progress Report

The Antarctic Climate Change and the Environment (ACCE) project is an initiative of the Scientific Committee on Antarctic Research (SCAR), which aims to provide an up-to-date assessment of the climatic changes that have taken place on the continent and across the Southern Ocean, give improved estimates of how the climate may evolve over the next century and examine the possible impact on the biota and other aspects of the environment. The plan for ACCE was formulated in 2005 and approved by SCAR Delegates in 2006. A small editing team was established and, as of April 2008, all contributions to the document have been received and are being edited prior to a draft being circulated to the Antarctic science community. The draft will be discussed extensively at the SCAR/IASC Open Science Conference in St Petersburg and the SCAR Delegates’ Meeting in Moscow, both of which will be held in July 2008. It is planned to publish the final report later in 2008.

The ACCE review is the first of its type and tries to place Antarctica in its global context. It has the potential to make an important contribution to our understanding of the role of the Antarctic in the Earth system. In the following sections we highlight some of the main conclusions of the ACCE report. However, it should be appreciated that some of these may change as the document goes through the review process, hence the subtitle to this document - "a Progress Report".