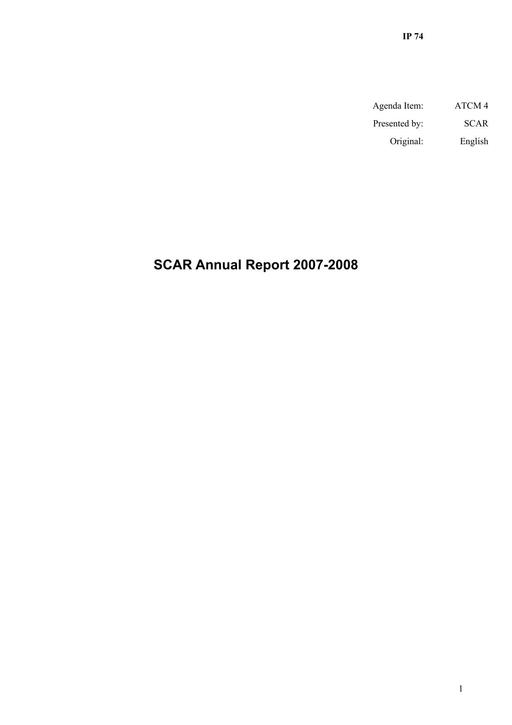 The Scientific Committee on Antarctic Research (SCAR) is the foremost, non-governmental organisation for initiating, developing, and coordinating high quality international scientific research in the Antarctic region, including the study of Antarctica’s role in the Earth System. SCAR adds value to research conducted by individual nations by facilitating and encouraging researchers to extend beyond their programmes and to partner with other colleagues worldwide that have similar or complimentary research interests. Collectively, SCAR programmes can often accomplish research objectives that are not easily obtainable by any single country, research group, or researcher.

Through its biennial Open Science Conference SCAR provides a forum for the community of polar scientists, researchers, and students to gather to report on the latest science, exchange ideas and explore new opportunities. SCAR also supports research Fellows and provides a broad range of data management and information products and services.

SCAR has led the development of a network of the four main bodies of the International Council for Science (ICSU) that are concerned with research in the Polar Regions and/or the cryosphere; these include SCAR, the World Climate Research Programme (WCRP), the International Arctic Science Committee (IASC), and the newly formed International Association for Cryospheric Sciences (IACS) of the International Union for Geodesy and Geophysics (IUGG). Creation of this 4-component network will help to ensure that polar scientific research is effectively coordinated.

We are now in the International Polar Year (IPY) 2007-2009, to which SCAR is making a significant contribution through its scientific research programmes. In recognition of the importance of the IPY the SCAR Open Science Conference for July 8-11 2008 (St Petersburg, Russia) has been broadened to be the SCAR/IASC Open Science Conference, and has the theme "Polar Research – Arctic and Antarctic Perspectives in the IPY". The IPY Steering Committee has formally adopted it as the first of three thematic IPY conferences (the second will be in Oslo in June 2010 and the third in Canada in 2012). Planning for the conference, which has attracted almost 1400 registrants, has occupied much of the year.

SCAR leverages its limited resources by partnering with selected global science programmes, providing them with an Antarctic perspective. These include the World Climate Research Programme (WCRP), elements of the International Geosphere-Biosphere Programme (IGBP), the International Permafrost Association (IPA), the Global Ocean Observing System (GOOS), the Partnership for Observations of the Global Ocean (POGO), the Census of Marine Life (COML), the Global Biodiversity Information Facility (GBIF), the Scientific Committee on Oceanic Research (SCOR), and the Scientific Committee on Solar Terrestrial Physics (SCOSTEP).

During 2007, SCAR's research focused on five themes in Antarctic science: (i) the modern ocean- atmosphere-ice system; (ii) the evolution of climate over the past 34 million years since glaciation began; (iii) the response of life to change; (iv) preparations to study subglacial lakes and their environs; and (v) the response of the Earth’s outer atmosphere to the changing impact of the solar wind at both poles. Highlights of scientific discoveries include: