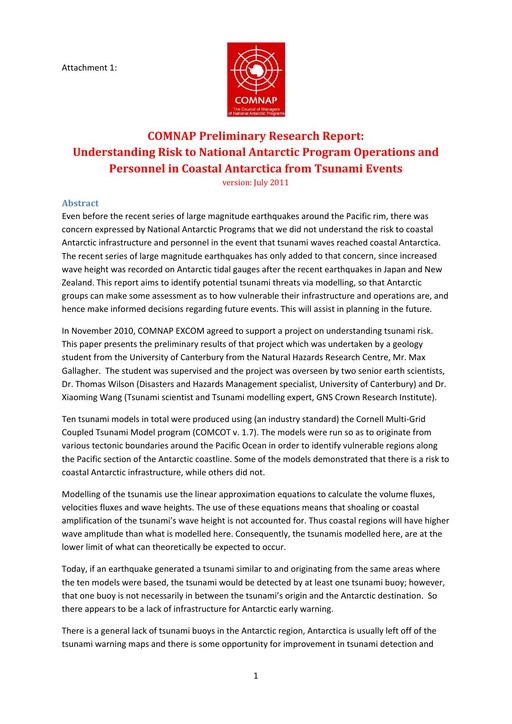 Even before the recent series of large magnitude earthquakes around the Pacific rim, there was concern expressed by National Antarctic Programs that we did not understand the risk to coastal Antarctic infrastructure and personnel in the event that tsunami waves reached coastal Antarctica. The recent series of large magnitude earthquakes has only added to that concern, since increased wave height was recorded on Antarctic tidal gauges after the recent earthquakes in Japan and New Zealand. This report aims to identify potential tsunami threats via modelling, so that Antarctic groups can make some assessment as to how vulnerable their infrastructure and operations are, and hence make informed decisions regarding future events. This will assist in planning in the future.

In November 2010, COMNAP EXCOM agreed to support a project on understanding tsunami risk. This paper presents the preliminary results of that project which was undertaken by a geology student from the University of Canterbury from the Natural Hazards Research Centre, Mr. Max Gallagher. The student was supervised and the project was overseen by two senior earth scientists, Dr. Thomas Wilson (Disasters and Hazards Management specialist, University of Canterbury) and Dr. Xiaoming Wang (Tsunami scientist and Tsunami modelling expert, GNS Crown Research Institute).

Ten tsunami models in total were produced using (an industry standard) the Cornell Multi Grid Coupled Tsunami Model program (COMCOT v. 1.7). The models were run so as to originate from various tectonic boundaries around the Pacific Ocean in order to identify vulnerable regions along the Pacific section of the Antarctic coastline. Some of the models demonstrated that there is a risk to coastal Antarctic infrastructure, while others did not.

Modelling of the tsunamis use the linear approximation equations to calculate the volume fluxes, velocities fluxes and wave heights. The use of these equations means that shoaling or coastal amplification of the tsunami s wave height is not accounted for. Thus coastal regions will have higher wave amplitude than what is modelled here. Consequently, the tsunamis modelled here, are at the lower limit of what can theoretically be expected to occur.

Today, if an earthquake generated a tsunami similar to and originating from the same areas where the ten models were based, the tsunami would be detected by at least one tsunami buoy; however, that one buoy is not necessarily in between the tsunami s origin and the Antarctic destination. So there appears to be a lack of infrastructure for Antarctic early warning.

There is a general lack of tsunami buoys in the Antarctic region, Antarctica is usually left off of the tsunami warning maps and there is some opportunity for improvement in tsunami detection and warning in the lower latitudes of the Pacific, especially given that the models demonstrate there is a risk to coastal Antarctic research stations. There is also a need for improved bathymetric data and for improved communications between relevant authorities and Antarctic base personnel. So that, in the event of tsunami approaching on coastal Antarctica, personnel can benefit from an early warning system that is accurate and effective. This preliminary study shows that further work is warranted and that there is a need for competent authorities to actively participant in this work.