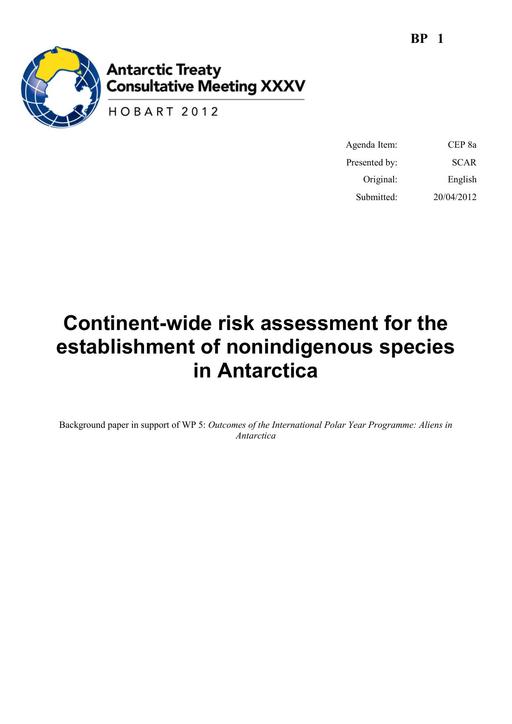 BP001: Continent-wide Risk Assessment for the Establishment of Nonindigenous Species in Antarctica

Invasive alien species are among the primary causes of biodiversity change globally, with the risks thereof broadly understood for most regions of the world. They are similarly thought to be among the most signi cant conservation threats to Antarctica, especially as climate change proceeds in the region. However, no compre- hensive, continent-wide evaluation of the risks to Antarctica posed by such species has been undertaken. Here we do so by sampling, identifying, and mapping the vascular plant propagules carried by all categories of visitors to Antarctica during the International Polar Year’s rst season (2007–2008) and assessing propagule establishment likelihood based on their identity and origins and on spatial variation in Antarctica’s climate. For an eval- uation of the situation in 2100, we use modeled climates based on the Intergovernmental Panel on Climate Change’s Special Report on Emissions Scenarios Scenario A1B [Nakićenović N, Swart R, eds (2000) Special Report on Emissions Scenarios: A Special Report of Working Group III of the Intergovernmental Panel on Climate Change (Cambridge University Press, Cambridge, UK)]. Visitors car- rying seeds average 9.5 seeds per person, although as vectors, scientists carry greater propagule loads than tourists. Annual tour- ist numbers (33,054) are higher than those of scientists (7,085), thus tempering these differences in propagule load. Alien species establishment is currently most likely for the Western Antarctic Peninsula. Recent founder populations of several alien species in this area corroborate these ndings. With climate change, risks will grow in the Antarctic Peninsula, Ross Sea, and East Antarctic coastal regions. Our evidence-based assessment demonstrates which parts of Antarctica are at growing risk from alien species that may become invasive and provides the means to mitigate this threat now and into the future as the continent’s climate changes.