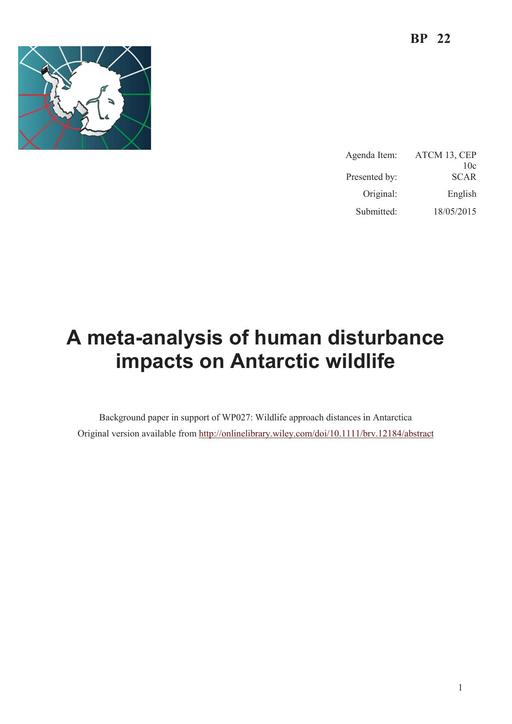 BP022: A Meta-analysis of Human Disturbance Impacts on Antarctic Wildlife

Evidence-based assessments are increasingly recognized as the best-practice approach to determine appropriate conservation interventions, but such assessments of the impact of human disturbance on wildlife are rare. Human disturbance comprises anthropogenic activities that are typically non-lethal, but may cause short- and/or longer-term stress and fitness responses in wildlife. Expanding human activity in the Antarctic region is of particular concern because it increases the scope and potential for increased human disturbance to wildlife in a region that is often thought of as relatively untouched by anthropogenic influences. Here, we use a meta-analytical approach to synthesise research on human disturbance to wildlife over the last three decades in the Antarctic and sub-Antarctic region. We combine data from 62 studies across 21 species on the behavioural, physiological and population responses of wildlife to pedestrian, vehicle and research disturbances. The overall effect size indicated a small, albeit statistically significant negative effect of disturbance (-0.39; 95% CI: -0.60 to -0.18). Negative effects were found for both physiological and population responses, but no evidence was found for a significant impact on wildlife behavioural responses. Negative effects were found across pedestrian, vehicle and research disturbances. Significant and high among-study heterogeneity was found in both disturbance and response sub-groups. Among species, it remains unclear to what extent different forms of disturbance translate into negative population responses. Most current guidelines to limit wildlife disturbance impacts in Antarctica recommend that approaches be tailored to animal behavioural cues, but our work demonstrates that behavioural changes do not necessarily reflect more cryptic, and more deleterious impacts, such as changes in physiology. In consequence, we recommend that pedestrian approach guidelines in the Antarctic region be revisited. Due to the high heterogeneity in effects, management guidelines for different sites and species will need to be developed on a case-by-case basis, ideally in conjunction with carefully designed experiments. Guidelines to reduce the impact of research activities per se require development to reduce the potential impacts of conducting research. We identify research questions that, if answered, will further improve the evidence base for guidelines to manage human disturbance in Antarctica.