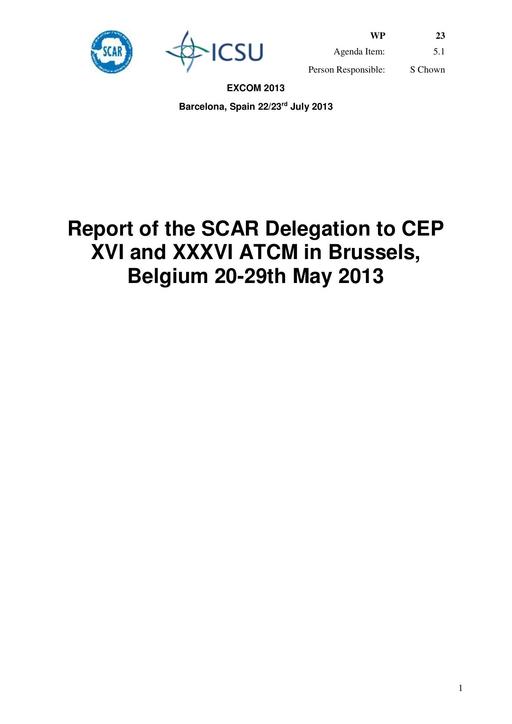 Title: Report of the SCAR Delegation to CEP XVI and XXXVI ATCM in Brussels, Belgium 20-29th May 2013

Introduction/ Background: SCAR provides objective and independent scientific advice to the Antarctic Treaty Consultative Meetings and other organizations on issues affecting the conservation and management of Antarctica.

Important Issues or Factors: SCAR provided five Working Papers (WPs), six Information Papers (IPs) and three Background Papers (BP). Many were submitted jointly with other Parties, Observers and Experts. The SCAR Lecture, given by Prof Chuck Kennicutt and jointly authored with Prof Jemma Wadham, was entitled 'Probing the Limits of Technology: Exploration of Subglacial Aquatic Environments'. The Treaty agreed on the first draft of a multi-year strategic plan. Along with the successful CEP five-year plan these documents will be useful to SCAR when it comes to its own priority setting for advice to the ATCM.

The following agreements were made:

Budget Implications: $20k per year for SC-ATS. Funds are also budgeted so the SCAR Delegation can attend the Antarctic Treaty Meetings.