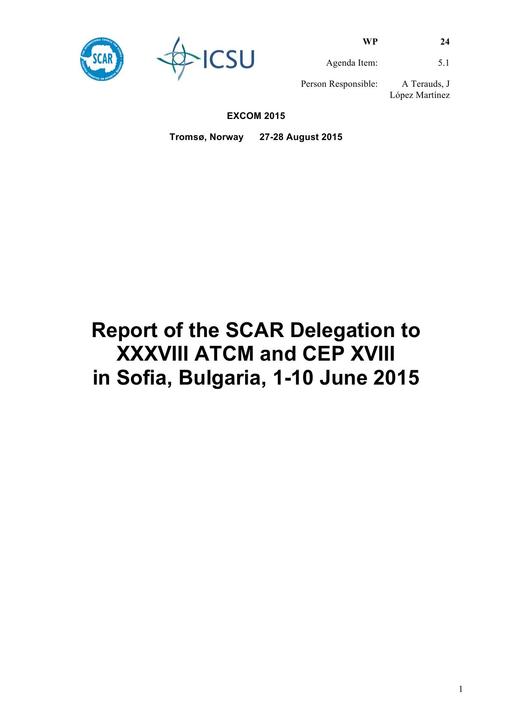 Introduction/ Background:
SCAR provides objective and independent scientific advice to the Antarctic Treaty Consultative Meetings and other organizations on issues affecting the conservation and management of Antarctica.

Important Issues or Factors:
SCAR submitted two Working Paper (WPs), six Information Papers (IPs) and three Background Papers (BPs) to CEP XVIII, some of which were also presented to the ATCM. Two of these papers were submitted jointly with Treaty Parties. The SCAR Lecture, given by Richard Bellerby was on "Southern Ocean Acidification". Leading up to the ATCM, SCAR also provided input to intersessional groups such as the contact group on climate change. SCAR scientists also provided feedback into the drafting of guidelines for activities in terrestrial geothermal areas. SCAR maintained a substantial involvement in the Antarctic Environments Portal, through editorial oversight and assistance with content development.

Agreements and Commitments:
The following agreements were made (either during the meeting itself or in associated discussions):

Budget Implications:
$20k per year for SCATS. Funds are also budgeted so the SCAR Delegation can attend the Antarctic Treaty Meetings.