By Narelle Tagged in SCATS 466 downloads 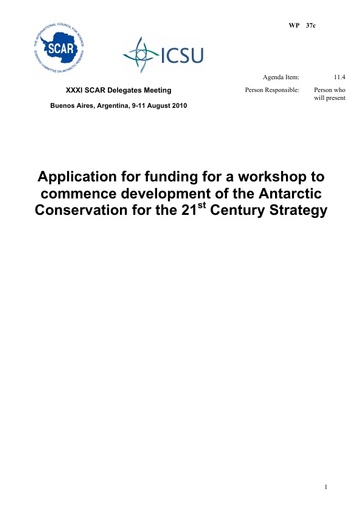 Title: Application for funding for a workshop to commence development of the Antarctic Conservation for the 21st Century Strategy

Relevant URLs or references to other reports: See Reports of the SCAR Observers to the Treaty and SCAR’s Working and Information Papers submitted to the Treaty Meetings over the past four years.

Introduction/ Background: The Standing Committee on the Antarctic Treaty System (SC-ATS) and a variety of other observers and experts provide advice to the Committee for Environmental Protection on conservation and conservation science in the Antarctic region. The extent of the advice has increased recently, with papers from SCAR on approach distances, persistent organic pollutants, Southern Giant Petrel, invasive alien species, bioprospecting and the relationship between the Antarctic environmental domains and terrestrial biodiversity data.

Recommendations/Actions and Justification: Additional funding of US$ 10 000 towards the first workshop (South Africa, May/June 2011) to commence the development of a conservation and conservation science strategy entitled ‘Antarctic Conservation in the 21st Century’. Such a document will provide much needed advice to the Committee for Environmental Protection and the Antarctic Treaty Consultative Parties, and will ensure that SCAR continues to provide the most current advice in this arena to the Treaty.

Expected Benefits/Outcomes: Integrated advice on conservation and conservation science priorities that draws on best practices from elsewhere and which continues to provide leadership in the science into policy arena in the Antarctic Treaty System.