A Snapshot of Biodiversity Protection in Antarctica 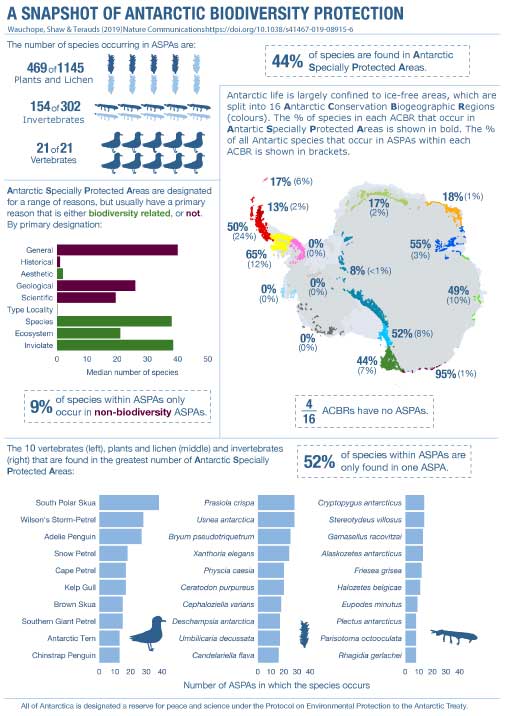 A review published in Nature Communications yesterday has assessed the representation of biodiversity in Antarctic Specially Protected Areas (ASPAs) and identified where they could be improved.

The review is based on research supported by the SCAR Standing Committee on the Antarctic Treaty System (SC-ATS) and the Australian Antarctic Science Program and contributes to the work of SCAR’s State of the Antarctic Ecosystem Scientific Research Programme. It summarises the results of a continent-wide review of terrestrial biodiversity protection in Antarctica.

The research was conducted by Hannah Wauchope from Cambridge University, Dr Justine Shaw from the University of Queensland, and Dr Aleks Terauds, Chief Officer of SC-ATS and Senior Research Scientist at the Australian Antarctic Division.

The review looks at more than 48,000 records of plants, lichens, animals and invertebrates across Antarctica and how well they are represented in Antarctic Specially Protected Areas (ASPAs) within 16 defined ecological regions. The infographic below provides a snapshot of current biodiversity protection in Antarctica.

The review identifies a bias towards more charismatic and easily identifiable species – such as penguins or seabirds – over species such as plants, lichens and invertebrates. The authors aim to inform systematic development of ASPAs to ensure long-term protection and conservation of Antarctica biodiversity.

“This study highlights the opportunity for proponents of ASPAs to consider managing for multiple objectives, ensuring appropriate management for the original designation, the associated biodiversity and any other values that are present,”

“It could also inform discussions on further developing the Antarctic protected area system, including at a related international workshop before this year’s Antarctic Treaty Consultative Meeting.” – originally cited by Australian Antarctic Division

All of Antarctica is designated a natural reserve for peace and science under the Protocol on Environmental Protection to the Antarctic Treaty. ASPAs are a system of extra area protection provided for under Annex V of this Protocol. The protected status mitigates threats to an area through strict controls on human activities and a reduction in associated impacts. Some 44% of Antarctic species are found in ASPAs.