Antarctica: Present and Future - Commemorative Day of the 30th Anniversary of the Signing of the Madrid Protocol, 4th October 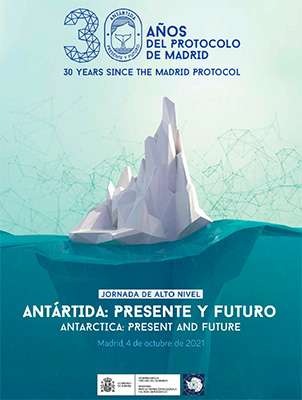 Antarctica: Present and Future - An international conference to commemorate the 30th anniversary of the Madrid Protocol, will be held at the National Archeaological Museum in Madrid, Spain, on 4th October 2021.

The conference will include talks by leading scientists, politicians and experts, among them Dr. Jerónimo López, Past President of SCAR.

The Official inauguration, the keynote speech as well as the HL Dialogue and the Scientific Tables will be broadcasted live:
https://www.youtube.com/watch?v=RIlKU084kSM
or https://twitter.com/i/broadcasts/1rmxPgLbdzmJN

Click here to view the full announcement and programme.

Antarctica is responsible for 20% of the global reduction of atmospheric CO2. Its ecosystem is changing rapidly due to the impact of climate change and rising temperatures, faster than anywhere else on Earth, threating a very delicate biological system.

The Southern Ocean, which surrounds Antarctica, is one of the least disturbed marine ecosystems on Earth, but it is increasingly under anthropogenic pressures such as pollution, illegal fishing, acidification and invasive exotic species. The need to increase the protection of these vulnerable ecosystems is becoming more and more urgent.

To commemorate the 30th anniversary of the Madrid Protocol, Spain organizes an international conference on October 4th, 2021. The conference will be an excellent opportunity for the State Parties to the Antarctic Treaty and the Madrid Protocol to review the achievements on the environmental protection of Antarctica during the 30 years of the Protocol’s implementation, reflect on the challenges ahead for the next 30 years and discuss concrete conservation measures such as the establishment of new Marine Protected Areas.

High-level Dialogues will bring together leading scientists and experts to discuss the different challenges that Antarctica is facing: climate change adaptation and mitigation, management of natural resources and human activities, and research and technological innovation. This will be followed by a Ministerial meeting of States Parties to the Antarctic Treaty and the Madrid Protocol.

To conclude, we will renew our commitment to the protection and conservation of Antarctica and our willingness to work jointly towards these goals with the adoption of the Madrid Declaration. It will be a concrete and tangible way of expressing the shared commitment to protect the biodiversity of this unique area of our planet with the view to COP15 of the Convention on Biological Diversity and the 40th annual meeting of CCAMLR.