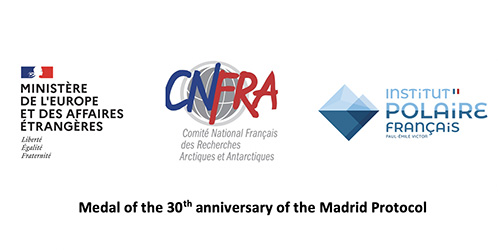 The Ministry of Europe and Foreign Affairs, the French National Committee for Arctic and Antarctic Research, and the French Polar Institute Paul-Emile Victor are pleased to award the unique medal commemorating the 30th anniversary of the Madrid Protocol on the Protection of the Antarctic Environment, of which Australia and France were the initiating nations, to Professor Steven Chown of Monash University in Melbourne, Australia.

Professor Chown's commitment to the Madrid Protocol is exceptional. His entire career has been devoted to the protection of the Antarctic environment. For over twenty years, his research has focused on the environmental challenges, policy and management of the Antarctic and sub-Antarctic regions. A world-renowned physiologist, one of whose main research interests is understanding the thermal limits and impacts of environmental change on Antarctic terrestrial invertebrates, Professor Chown is best known for his studies on invasive species and their impacts on the Antarctic environment. In this capacity, he was the first director of the South African National Centre of Excellence for Invasion Biology. Professor Chown has also led and supervised many of the leading works on Antarctic conservation. These include his work identifying the conservation challenges facing the white continent, his involvement in the assessment of the current network of specially protected areas in Antarctica and the Southern Ocean, and his recent research identifying Antarctic wilderness and inviolate areas. Many of his results have been major contributions to the Committee for Environmental Protection's (CEP) understanding of the threats to the biodiversity and ecosystems of this protected continent and its surrounding ocean. His work thus directly responds to the recommendations of Article 10 of the Madrid Protocol to provide the best scientific and technical advice to the Antarctic Treaty Consultative Meetings.

In addition to this prolific scientific career, Professor Chown has also been instrumental in supporting the objectives of the Madrid Protocol through his many volunteer positions, including on the Scientific Committee on Antarctic Research (SCAR). First, as the head of the Standing Committee of the Antarctic Treaty System (SCATS), where for eight years Professor Chown helped coordinate the science within SCAR to develop and provide relevant scientific information to the Antarctic Treaty, the PBS, and the Commission for the Conservation of Antarctic Marine Living Resources (CCAMLR).

However, Professor Chown's major contribution has undoubtedly been as President of SCAR for the past four years. His leadership has been instrumental in advancing the commitment of the SCAR communities to better understand Antarctic environmental change and associated ecosystem impacts. Professor Chown's support for the launch of SCAR's three new scientific research programs, which focus on understanding Antarctic climate change, Antarctica's contribution to sea level rise, and how best to conserve Antarctica's unique environment, will enable the community to produce results relevant to supporting the goals of the Madrid Protocol in the years to come. This is especially true since Professor Chown has been an advocate for involving the next generation of scientists in conservation and interaction with Antarctic environmental protection bodies.
The above examples are only a brief overview of Professor Chown's involvement in the protection of this remote environment, which plays such an important role in the regulation of the world's climate and in the planetary balances that concern all human societies.

This medal will be presented to Professor Chown on the occasion of the opening of the 43rd Meeting of the Consultative Parties to the Antarctic Treaty (ATCM), which will take place in Paris on June 15, to underline the major role played by the Madrid Protocol, 30 years after its signature, for the preservation of the environment and the exceptional ecosystems of the Antarctic.

Click here to view the press release (in French).