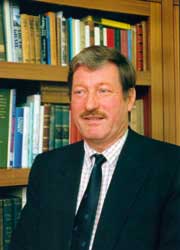 SCAR is deeply saddened to learn of the death of Prof Dr Jörn Thiede at the age of 80.

Jörn Thiede was born in Germany on 14 April 1941. He studied geology at the Universities of Kiel (Germany), Buenos Aires (Argentina), and Vienna (Austria) between 1962 and 1971, receiving his PhD in 1971 from the University of Kiel. For the next decade, he worked in various research and academic positions in Argentina, Denmark, Norway and the USA. In 1982, he returned to Kiel, initially as Professor in Historical Geology and Palaeontology, then as the founding Director of the GEOMAR Research Centre for Marine Geosciences at Kiel (1987–95), and Head of the GEOMAR Department of Palaeo-Oceanology (1987–97). In 1997 he was appointed Director of the Alfred-Wegener-Institute (AWI) for Polar and Marine Research in Bremerhaven, Germany. He retired from AWI in 2006 but continued in research at the University of Kiel.

Jörn was awarded the Steno Medal of the Danish Geological Society (1984), the Leibniz Prize of the German Research Foundation DFG (1988) and the Murchison Medal of the Geological Society of London (1994). He achieved international recognition as a marine geologist and was also known for his studies of the climatic evolution of the North Atlantic – Arctic region, “from greenhouse to ice-house”.

As Director of AWI, Jörn became the German Delegate to SCAR in 1997. At his first SCAR meeting, XXV SCAR in Concepción, Chile, in 1998, he was one of the instigators of the review of SCAR. He was elected President at XXVII SCAR in Shanghai, China, 2002, and, as such, was instrumental in implementing the recommendations of the SCAR Review.

He hosted the first two-part SCAR meeting in Bremen and Bremerhaven in 2004 at which the first of the regular SCAR Open Science Conferences was held. He also initiated the SCAR Fellowship Programme that was originally funded by the award to SCAR of the Prince of Asturias Prize in 2002. In recognition of “his efforts in taking SCAR to new heights”, he was elected an Honorary Member of SCAR by acclamation at XXIX SCAR in 2006.

Our thoughts are with Jörn’s family, friends and colleagues at this time.