Antarctica loses one of its greatest champions 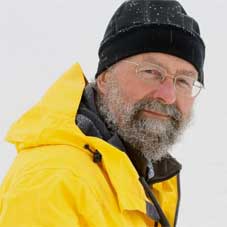 SCAR is saddened to inform our community that Professor David Walton passed away on 12 February 2019.

David had an extraordinarily influential role in SCAR, both formally, through the various positions he held, and informally by way of the advice and mentorship he provided to many Antarctic researchers.

Although David’s main early research concerned the ecology of Antarctic plants, with the rosaceous sub-Antarctic genus Acaena being a long-standing favourite, his work quickly diversified. His knowledge of Antarctic science came to be encyclopaedic and his understanding of the ways in which science can and should influence policy profound.

Within SCAR, David took a range of roles. Perhaps one of his most influential was as Chair of SCAR’s Group of Specialists on Environmental Affairs and Conservation (GOSEAC). Before the adoption of the Protocol on Environmental Protection to the Antarctic Treaty and the establishment of the Committee for Environmental Protection (CEP), GOSEAC was the source of environmental and conservation advice to the Antarctic Treaty Parties. David had an exceptional talent for identifying those areas of environmental conservation where the Treaty Parties needed further advice, and great capacity for delivering on requests for advice from the Parties. He had such broad knowledge of Antarctic and Southern Ocean science, and commanded such respect from its practitioners, that he could readily draw on expertise from across the globe to deliver the very best evidence-based advice to the Parties.

When the CEP commenced its work, SCAR immediately asked David to take over the role of interfacing with the CEP to continue to provide advice not only to the CEP, but also, in keeping with the Protocol, directly to the Treaty Parties. Many of the practices and policies currently in use by the CEP have an influence that can be traced back to the work of David in his SCAR role. So can the content of a wide range of the Parties’ resolutions. Following SCAR’s restructure in the early 2000s, David again took on the main interface role with the Antarctic Treaty System, becoming the first chair of the SCAR Standing Committee on the Antarctic Treaty System. He held this position until 2006.

Later, when SCAR agreed, with a range of countries, to participate as a key partner in the Antarctic Environments Portal, the appointment of David as its first editor was a simple decision. David’s exceptional knowledge, connections to the community, and understanding of the science-policy interface made him the top choice for the role. As was David’s lifelong habit with SCAR, he accepted the invitation with delight and immediately got to work. 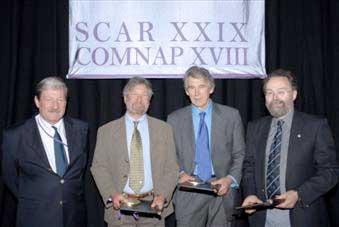 David had many roles, including his formal, highly successful position with the British Antarctic Survey, as founding and Chief Editor of Antarctic Science, accomplished and prolific author, purveyor of fine Antarctic books, and Chief Scientist for the unusual and fruitful Antarctic Circumnavigation Expedition. He was always busy. But he was never too busy to respond with great energy, enthusiasm and insight to requests from SCAR. In 2006, David was awarded the SCAR Medal for International Scientific Coordination.

In an informal setting, David’s friendship and energy were likewise undiminished. He was free with his time and advice, and with his spirited humour. David could always be counted on for informed, wise and experienced counsel, whether it was to do with a research idea, a tactic concerning a policy brief, a career move, or simply the most appropriate wine for a given country, setting and meal. His influence extended everywhere across the Antarctic community through mentorship, advice, collaboration, and thoughtful encouragement.

David Walton has been one of Antarctica’s greatest supporters and SCAR’s deepest friends. We will miss him in every way: his erudition, his humour, his counsel, his concern for the region, his appetite for hard work, and his friendship. SCAR’s thoughts are with his wife Sharon and his three children. If you wish to send a message to David's family please contact This email address is being protected from spambots. You need JavaScript enabled to view it. at the British Antarctic Survey.