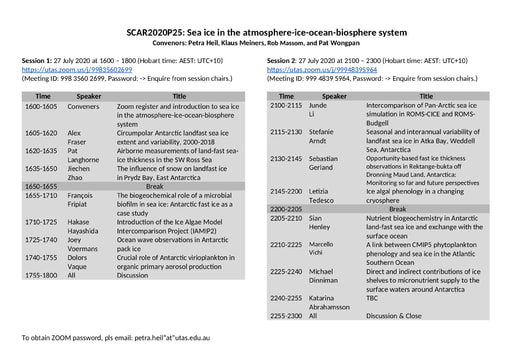 SCAR 2020 Parallel Session 25: Sea ice in the atmosphere-ice-ocean-biosphere system - How, where and why is it changing, and what are the effects?

While there is strong focus on rapid change occurring in Arctic sea ice, relatively little is known about the complex sea-ice environment around Antarctica (comprising both pack and fast ice), how and why it is changing and varying, and the wide-ranging physical, biological and chemical effects of such change/variability. Improved understanding of the southern coupled sea ice-ocean-atmosphere-biosphere system is required to truly explain the marked and baffling recent reversal in overall sea-ice extent – from a slight positive trend to successive record maxima peaking in 2014, followed by a rapid decline. While sea-ice extent and concentration are monitored reasonably accurately from space, much remains to be learned about the processes driving annual advance and retreat; the role of snow; sea-ice interaction with the ice sheet; sea ice as a habitat; sea-ice biogeochemical processes; and teleconnections with lower latitudes (including sea-ice relationships with southern hemisphere weather and climate).