pdf BP003: Abstract of the SCAR Lecture: Exploring the Future of Scientific Research in Antarctica 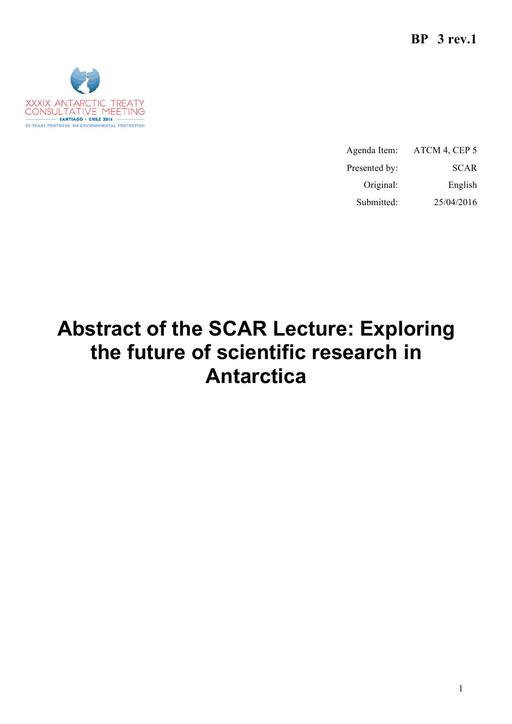 BP003: Abstract of the SCAR Lecture: Exploring the Future of Scientific Research in Antarctica

Abstract of the SCAR Lecture: Exploring the future of scientific research in Antarctica

Scientific research in Antarctica provides critical knowledge about global processes and is recognised by the Antarctic Treaty System as playing a fundamental role in the management of the region. Antarctic research also offers significant opportunities for international cooperation and for communicating and emphasising the importance of Antarctica and the Southern Ocean to both the general public and decision makers.

To support SCAR's leadership and international cooperation in Antarctic and Southern Ocean research and assist in achieving its mission of excellence in science and scientific advice to policy makers, in 2014 SCAR organized the first SCAR Antarctic and Southern Ocean Science Horizon Scan, with support from the Tinker Foundation and others. This initiative assembled world leading Antarctic scientists, policy makers, leaders, and visionaries to identify the most important scientific questions that will or should be addressed by research over the next two decades and beyond. This was the first time that the international Antarctic community has formulated a collective vision, through discussions, debate and voting. The outcome was an agreement on 80 of the most important Antarctic research questions, laying out an ambitious scientific “roadmap” for the next 20 years and beyond.

Answering these many questions will require sustained and stable funding; access to all of Antarctica throughout the year; application of emerging technologies; strengthened protection of the region; growth in international cooperation; and improved communication among all interested parties. At the same time, many Antarctic programmes are suffering budget pressures and uncertainties.

The Council of Managers of National Antarctic Programs (COMNAP) led a second stage of the process, with the Antarctic Roadmap Challenges (ARC) project, focused on answering the question: “How will national Antarctic programmes meet the challenges of delivering Antarctic science identified in the Horizon Scan?”

The 2016 SCAR Science Lecture to the ATCM will present an overview of this process and its main conclusions to the Delegates based on the published outputs of the SCAR Horizon Scan1,2 and the ARC project3. This presentation will describe how actions will be implemented to explore and achieve future scientific priorities and discuss the associated challenges. We will reinforce that wider international partnerships, more coordination of science and infrastructure funding and expanded knowledge-sharing are essential. We will also reinforce to the Delegates the importance of using scientific evidence in decision- making and the development of conservation measures. These processes have been a collective effort of the Antarctic community, based on broad international cooperation, involving many hundreds of scientists, managers and technicians from dozens of countries, with a close cooperation between SCAR and COMNAP, carried out in a framework inspired by the Antarctic Treaty.