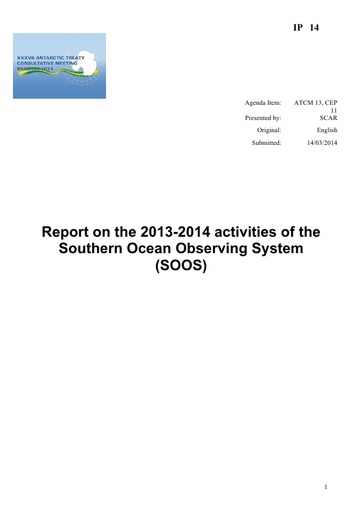 The Southern Ocean Observing System (SOOS) is a joint initiative of the Scientific Committee on Antarctic Research (SCAR) and the Scientific Committee on Oceanic Research (SCOR), and endorsed by the Partnership for Observations of the Global Ocean (POGO), and the Climate Variability and Predictability (CLIVAR) and Climate and Cryosphere (CliC) projects of the World Climate Research Programme (WCRP). This paper reports on activities and milestones of SOOS in the 2013-2014 period, including meetings and workshops, governance and management, data management, sponsorship and endorsement, and communication and outreach. It also lists planned activities for 2014.