pdf Yves Frenot's presentation on the Madrid Protocol and the CEP 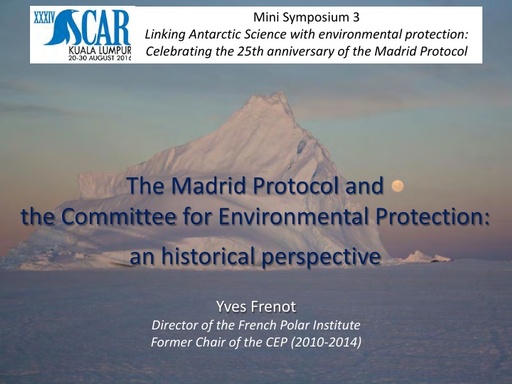 "The Madrid Protocol and the Committee for Environmental Protection: a historical perspective": the presentation given by Dr Yves Frenot (Director of the French Polar Institute and former Chair of the CEP 2010-2014) at the Mini-Symposium "Linking Antarctic Science with Environmental Protection: Celebrating the 25th Anniversary of the Madrid Protocol".  The symposium was held on 23 August 2016 as part of the XXXIV SCAR Open Science Conference held in Kuala Lumpur, Malaysia, to celebrate the 25th Anniversary of the Antarctic Treaty's Environmental Protocol, signed in Madrid in October 1991.