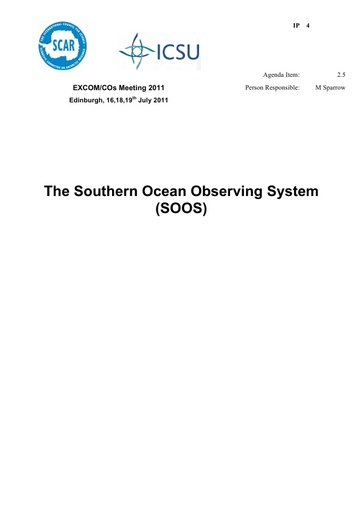 Introduction/ Background: This paper summarises progress with the design and implementation of a Southern Ocean Observing System (SOOS) over the last year. A SOOS Design Plan has been completed, an International Program Offices is being established at the Institute of Marine and Antarctic Studies in Hobart, Australia, and an Executive Officer has been appointed.

Important Issues or Factors: The SOOS is also a significant legacy of the recent International Polar Year (IPY). It also addresses Antarctic Treaty Resolution 3 (2007) Long-Term Monitoring, which welcomed and supported “the proposal by SCAR to establish a multi-disciplinary pan-Antarctic observing system, which will, in collaboration with others, coordinate long-term monitoring and sustained observation in the Antarctic”, the recommendations from the Antarctic Climate Change and the Environment Report (Turner et al., 2009), and recommendations arising from the 2010 Antarctic Treaty Meeting of Experts on Climate Change and Implications for Antarctic Management and Governance (particularly Recommendation 15, regarding the development of sustained integrated observing systems).

Recommendations/Actions and Justification: EXCOM are requested to note this progress and to encourage relevant national agencies to participate in and support the aims of the SOOS. The SCAR/SCOR Oceanography Expert Group will act as the Science Steering Committee of the SOOS, with a new membership under the current co-chairs Mike Meredith (UK) and John Gunn (Aus).

Expected Benefits/Outcomes: A direct contribution to many aspects of the SCAR Mission and Goals: baseline data for monitoring climate change effects (heat and freshwater balances; stability of the overturning circulation, sea level rise....) and ecosystem changes. There is an urgent need to increase understanding in each of these areas to inform decision-makers confronted with the challenges of climate change, sea-level rise, ocean acidification, and the sustainable management of marine resources. To deliver this information, sustained observations of the physical, biogeochemical and biological state of the Southern Ocean are critical.

Budget Implications: SOOS has to date been focused through the contributions of other budget lines (e.g. AGCS and the Ocean Expert Group). A separate SOOS budget line of around $5000 a year should be established in order to support SOOS related activities. All costs are shared with SCOR.