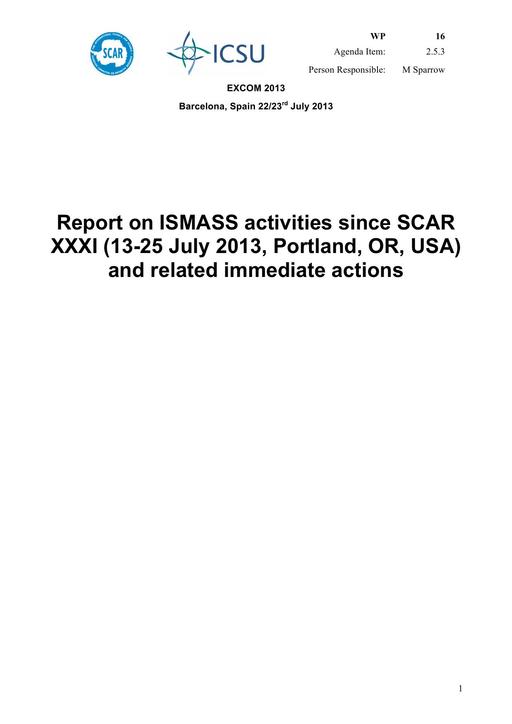 Introduction/Background: ISMASS, initially established in 1993 became, with the reorganization of SCAR, an Expert Group of the SCAR Physical Sciences Standing Scientific Group. Co-sponsorship by IASC was approved by the Cryosphere Working Group of IASC on 13 January 2011, and endorsed by the IASC Council. On 14 July 2012 an ISMASS workshop was held in Portland, OR, USA, within the frame of SCAR XXXI. On 21 May 2013, WCRP-CliC formally presented a request of co- sponsorship of ISMASS, which should be considered as tacitly accepted in light of the MoA between CliC, IASC and SCAR of 16 April 2013. Nonetheless, a formal endorsement is requested to SCAR EXCOM.

The Portland workshop covered both scientific and organizational aspects. A new Steering Committee (SC) was partially appointed (but not completed). The complete new SC is here presented to SCAR-EXCOM, with the request of formal endorsement.
This new SC will hold its first meeting in Sheffield, UK, on 7 Oct. 2013. The main tasks will be to define updated terms of reference for ISMASS, the strategy of ISMASS and the next steps to be undertaken, as well as clearly define some organizational aspects. Partial funding (total funding to be shared by IASC and CliC) is requested to support this meeting.

Important Issues or Factors: The importance of the subjects to discuss, looking towards a revitalization of ISMASS, recommends a face-to-face meeting.

Budget Implications: Budget is required for the first meeting of the newly appointed Steering Committee, to be held at the University of Sheffield, UK, on 7 Oct. 2013. It will involve travel and subsistence (including 2 hotel nights) for 8 people (2 travelling from the UK, 4 from continental Europe and 2 from the USA). The cost will be shared by SCAR, IASC and CliC, so a cost of no more than 9,000 € is budgeted, 3,000 € per organization.