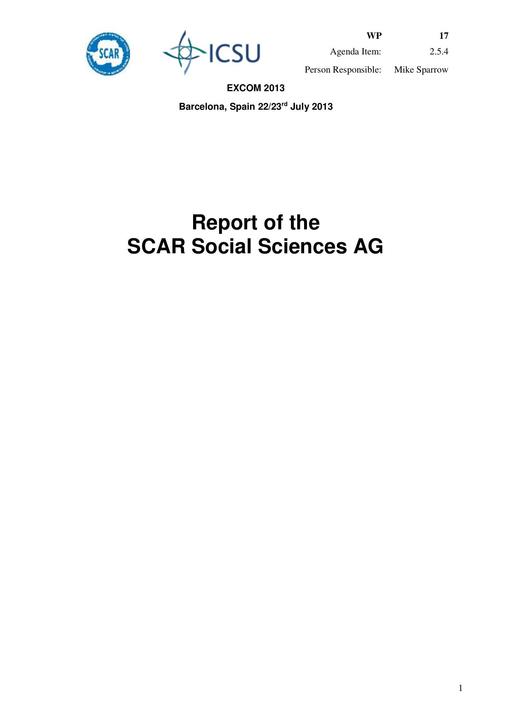 Introduction/Background: Increasingly, Antarctic institutions and stakeholders acknowledge the costs and benefits of human activities in Antarctica not merely from an economic perspective but also from environmental, social and cul­tural points of view. The coverage (in the media and in policy discussions) of the many aspects of human endeavour in the Antarctic asks policy-makers, educators, scientists and the wider public to weigh multiple costs and benefits (that is to say, values) against one another. Understanding the extent and nature of the values that human beings place on Antarctica has large-scale and very serious implications for human engagement with and activity in the Antarctic in the future and significant public-relations implications in relation to the wider social acceptability of even traditional forms of Antarctic activity.

Important Issues or Factors: Social scientists and humanities researchers have the expertise and tools to lead an academic assessment of Antarctic values.  The Social Sciences AG (hereon “the group”) was established to carry out research targeted at understanding the range of values underpinning human engagement with Antarctica.  As shown in this report (including its appendices), this research effort has progressed considerably.  At the same time, it has become clear that a thorough exploration of human values associated with Antarctica is a complex task that requires continued efforts.  This research project promises considerable benefits in the long run, especially with regard to understanding decision-making in an Antarctic context and developing alternative strategies for environmental management.

Recommendations/Actions and Justification: We request that the group’s term be extended to 2015 to maintain the momentum established through the Antarctic values research project and to enable a thorough examination of the complexities associated with Antarctic values and their implications.

Expected Benefits/Outcomes: The group will continue to raise the profile of SCAR in the public realm and in social science and humanities research communities by demonstrating that SCAR supports multi-disciplinary research efforts outside the realm of the natural sciences.  An examination of Antarctic values through this group will also help SCAR to root its scientific advice in a thorough understanding of the drivers of human engagement with the Antarctic.  Finally, a range of academic publications resulting from this research effort will bolster SCAR’s scholarly record.

Partners: The group has established contact with representatives of the IASC Social and Human Sciences Working Group and is in regular communication with the International Arctic Social Sciences Association (IASSA).  The group also collaborates with the SCAR History EG as highlighted by the latest joint SCAR History and Social Sciences workshop, held in Cambridge from 1-5 July 2013.

Budget Implications: The group would like to continue operating with the current budget of $3000 per year.