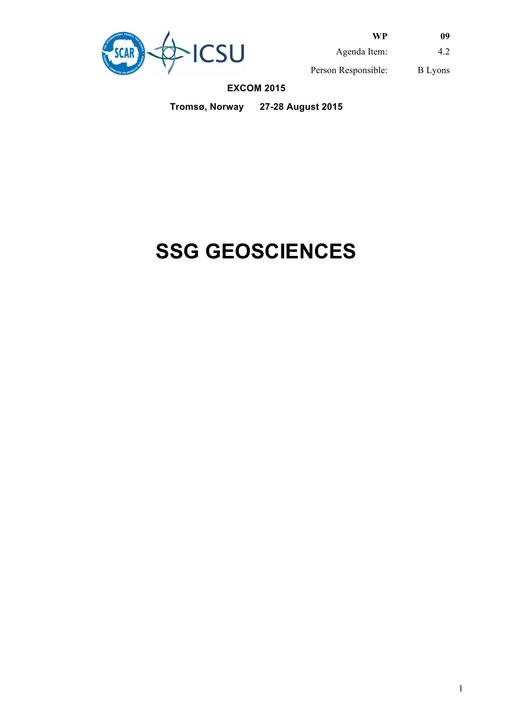 Introduction/Background: SSG- Geosciences is responsible for 6 Expert Groups (ADMAP, ANTPAS, ANTVOLC, GIANT, GRAPE and IBCSO) and 2 Action Groups (CGG and GeoMap). In addition there is a proposal for the final approval of Action Group on Geological Heritage and Geo-conservation. The SSG-Geosciences is also related to the activities of PAIS and SERCE Scientific Research Programmes. These groups share their activities with other groups of SSG-PS and SSG-LS. During the XXXIII Biennial Meetings (Auckland, 2014) the Antarctic Volcanism (ANTVOLC) Expert Group was approved. This group is focused on the study on different subjects related to the volcanic features and activity in Antarctica, including the advice for volcanic crisis. Besides this in 2014 the SSG GeoMAP Action Group was also approved. This AG promotes the compilation and integration of geological mapping and surficial features in Antarctica. In 2015, the XII International Symposium on Antarctic Earth Sciences (ISAES) was held in Goa (India), with an attendance of more than 400 scientists of 27 countries. This symposium has provided an opportunity of sharing and discussion of the geological knowledge on key issues in Antarctica and promoted the meeting of different groups.

Important Issues or Factors: The new groups ANTVOLC and GeoMap are progressing and started their different activities. The proposal on the Action Group on Geological Heritage and Geo- conservation is completed and presented to be approved by the ExCom.The SSG-Geoscicences recognize the success of the ISAES 2015, and congratulates the organizing committee.

Recommendations/Actions and Justification: SSG-Geosciences support the final approval by the ExCom of Action Group on Geological Heritage and Geo-conservation. No additional recommendations or actions have been received from Expert and Action Groups.

Expected Benefits/Outcomes: All the groups continue adequately their activities improving the integration of Antarctic researches and the scientific results in their fields. It is remarkable that the new compilation of magnetic anomalies ADMAP 2 is nearly ready and also other SCAR products like the high-resolution bathymetry map in the Drake Passage is also likely to be released soon.

Partners: IAVCEI - International Association of Volcanology and Chemistry of the Earth's Interior.