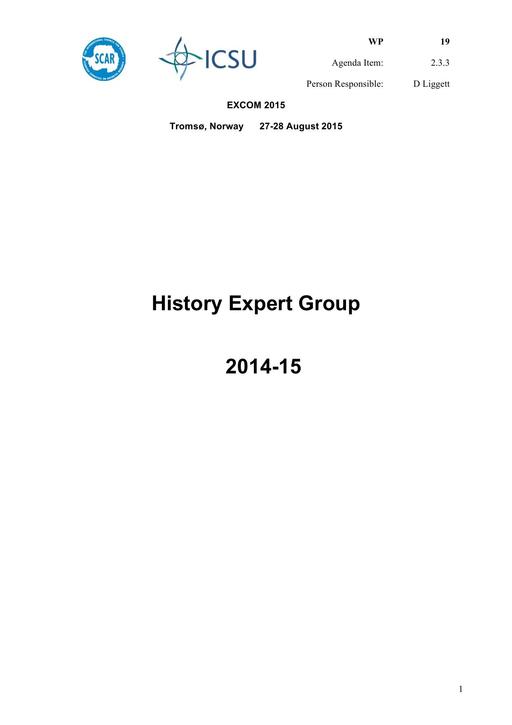 Introduction/ Background:
The Expert Group started as an Action Group in 2004 and held its first workshop in 2005. Since then the Group has flourished and membership of the Expert Group has steadily increased, as has the geographical and disciplinary diversity of the participants. The Group’s meetings continue to serve as a valuable discussion space for students, junior and senior scholars alike. Meetings have been held in four continents (Africa, Europe, North America, South America), permitting the core group of academic historians to be joined by local researchers who would likely not otherwise have joined the Group. The SCAR Expert Group provides a unique and irreplaceable site for scholars to exchange ideas and develop historical research related to the Antarctic. Collaborative research projects undertaken by some of the group members demonstrate the group’s dynamism.

Important Issues or Factors:
The core disciplinary identity of the Expert Group has steadily expanded from historians to include archeologists, anthropologists, cultural heritage specialists, and others, in addition to polar veterans from various disciplines The Group now has significant expertise in cultural heritage issues, particularly as many members of the International Polar Heritage Committee, and is well placed to make a stronger and more formal contribution to SCAR within this domain. The Group’s meetings have been characterized by a welcoming and inclusive atmosphere, particularly with regard to involving PhD students, an environment that has directly contributed to the growth of its membership but also to the development of joint projects and publications. Two joint workshops and one joint session with the SCAR Social Science and Humanities Expert Group were organized during the last SCAR OSC. The connection to researchers from IASC is also very good as the new IASC President Susan Barr from the Norwegian Directorate for Cultural Heritage gave the keynote speech during the Panel session on "Connecting the past-present-future: studies and methods in history for Antarctic research and science" the SCAR OSC 2014. During the next SCAR OSC in Malaysia (2016) we hope to extend the membership to more Asian and especially Malaysian scholars.

Recommendations/Actions and Justification:
We wish to continue the SCAR History Expert Group in its current form. We plan to continue collaborating with the Social Sciences Expert Group.

Expected Benefits/Outcomes:
Workshops and publications serve as public outreach for SCAR. The current high level of publications by Group members will continue, both individually and through collective forums such as special journal issues and the edited volume “Antarctica and the Humanities”, edited by three members of the History Expert Group (under contract with Palgrave Macmillan, expected publication early 2016). An expanded role related to identifying, charting and managing Antarctic heritage is envisaged.

Budget Implications:
US$ 5.000 to subsidize the participation of graduate students and scholars from low-income countries to participate in the next SCAR OSC in Kuala Lumpur in 2016.