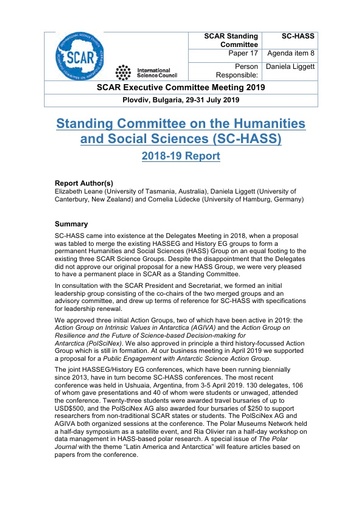 Standing Committee on the Humanities and Social Sciences (SC-HASS), 2018-19 Report

SC-HASS came into existence at the Delegates Meeting in 2018, when a proposal was tabled to merge the existing HASSEG and History EG groups to form a permanent Humanities and Social Sciences (HASS) Group on an equal footing to the existing three SCAR Science Groups. Despite the disappointment that the Delegates did not approve our original proposal for a new HASS Group, we were very pleased to have a permanent place in SCAR as a Standing Committee.

In consultation with the SCAR President and Secretariat, we formed an initial leadership group consisting of the co-chairs of the two merged groups and an advisory committee, and drew up terms of reference for SC-HASS with specifications for leadership renewal.

The joint HASSEG/History EG conferences, which have been running biennially since 2013, have in turn become SC-HASS conferences. The most recent conference was held in Ushuaia, Argentina, from 3-5 April 2019. 130 delegates, 106 of whom gave presentations and 40 of whom were students or unwaged, attended the conference. Twenty-three students were awarded travel bursaries of up to USD$500, and the PolSciNex AG also awarded four bursaries of $250 to support researchers from non-traditional SCAR states or students. The PolSciNex AG and AGIVA both organized sessions at the conference. The Polar Museums Network held a half-day symposium as a satellite event, and Ria Olivier ran a half-day workshop on data management in HASS-based polar research. A special issue of The Polar Journal with the theme “Latin America and Antarctica” will feature articles based on papers from the conference.

We recommend that the SCAR Executive Committee take note and approve of the activities undertaken by SC-HASS to date and remain supportive of future initiatives, including the organisation of our biennial conferences.