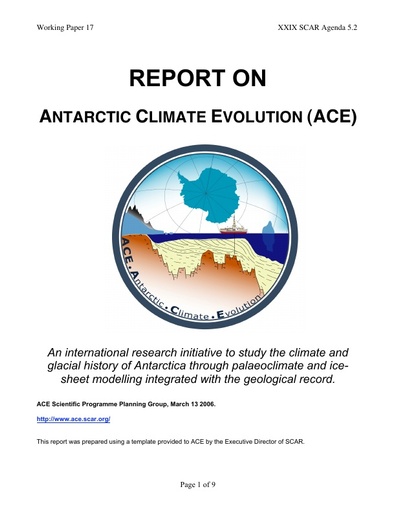 ACE promotes the exchange of data and ideas between research groups focussing on the evolution of Antarctica’s climate system and ice sheet. Although it has only been running officially since the beginning of 2005, its two-year planning phase and its origins from the former SCAR programme ANTOSTRAT, which ended in 2001, has allowed ACE to develop several advances in our understanding of Antarctic history. ACE’s role is to facilitate cooperation between earth scientists through meetings and symposia, to assemble the results of these collaborations in the scientific literature, and to promote the development and funding of international research collaborations. Full details of the ACE programme can be found on its website, launched in January 2005. This paper summarises ACE's five main achievements to date, programme dissemination, progress against prior work plans, proposed work plans for the next two years, IPY contributions and supporting information.