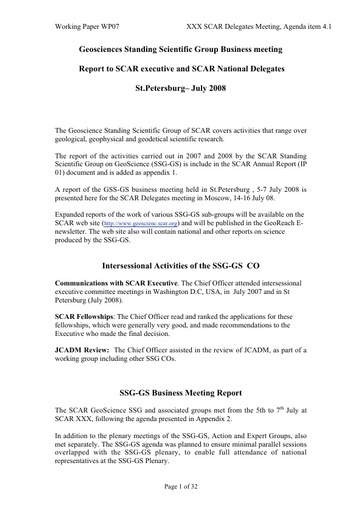 The Geoscience Standing Scientific Group of SCAR covers activities that range over geological, geophysical and geodetical scientific research. The report of the activities carried out in 2007 and 2008 by the SCAR Standing Scientific Group on GeoScience (SSG-GS) is include in the SCAR Annual Report (IP 01) document and is added as appendix 1. A report of the GSS-GS business meeting held in St.Petersburg, 5-7 July 2008 is presented here for the SCAR Delegates meeting in Moscow, 14-16 July 08. Expanded reports of the work of various SSG-GS sub-groups will be available on the SCAR website and will be published in the GeoReach E-newsletter. The web site also will contain national and other reports on science produced by the SSG-GS.