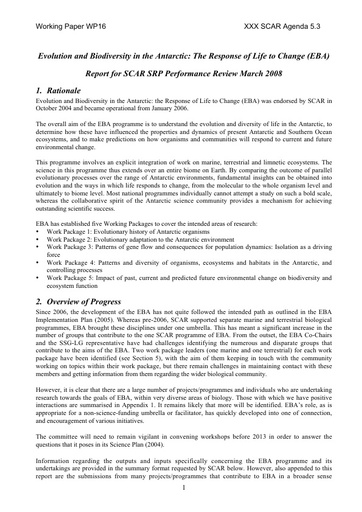 Evolution and Biodiversity in the Antarctic: The Response of Life to Change (EBA) Report for SCAR SRP Performance Review March 2008

Evolution and Biodiversity in the Antarctic: the Response of Life to Change (EBA) was endorsed by SCAR in October 2004 and became operational from January 2006. The overall aim of the EBA programme is to understand the evolution and diversity of life in the Antarctic, to determine how these have influenced the properties and dynamics of present Antarctic and Southern Ocean ecosystems, and to make predictions on how organisms and communities will respond to current and future environmental change.

This programme involves an explicit integration of work on marine, terrestrial and limnetic ecosystems. The science in this programme thus extends over an entire biome on Earth. By comparing the outcome of parallel evolutionary processes over the range of Antarctic environments, fundamental insights can be obtained into evolution and the ways in which life responds to change, from the molecular to the whole organism level and ultimately to biome level. Most national programmes individually cannot attempt a study on such a bold scale, whereas the collaborative spirit of the Antarctic science community provides a mechanism for achieving outstanding scientific success.

EBA has established five Working Packages to cover the intended areas of research: