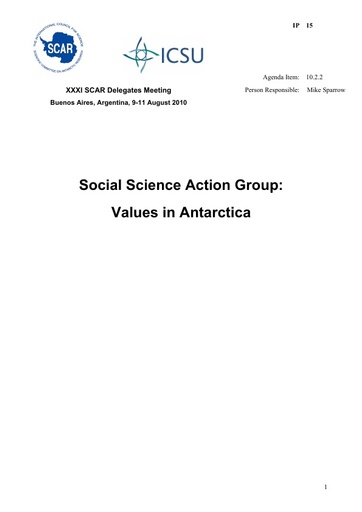 The International Polar Year has increased people's awareness of the polar regions and stimulated high-quality scientific cooperation between participants from more than 60 countries.  Media coverage has brought information about the Southern Continent to millions of people around the world and has given them cause to weigh multiple values against one another when considering the overall worth of humanity’s endeavours in Antarctica.  The balancing of these values may influence a wide range of decisions.  Some of these decisions will, collectively, affect entire global systems, primarily via their impacts on climate, natural resources, and international policy.  Thus, understanding the extent and nature of the values that human beings place on Antarctica has large-scale and very serious implications.  It was this concern that gave rise to the recognition that an action group was needed to study and report on those values.

A steering group was formed in January, 2010.  The key outcomes of two on-line meetings are:

This Information Paper is to serve only as a brief, interim report on the early activities of the Social Science Action Group.  No request is being made of the delegates other than to continue their support for this Action Group.

The benefits expected to arise from the work of the Social Science Action Group include:

The formation of partnerships with other SCAR Action Groups (History, CBET) as well as non-SCAR polar social science institutions and agencies is currently being explored.  It is hoped that by establishing these ties, a greater breadth of perspectives and knowledge can be included.