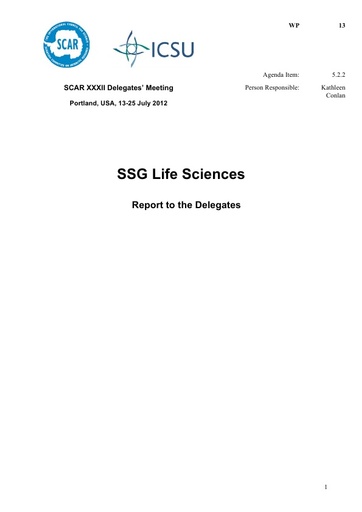 Scientific Research Programme Proposals: Following approval by the Delegates, Don Cowan (SA) developed AntEco (State of the Antarctic Ecosystem) and Julian Gutt (GER) developed AnT-ERA (Antarctic Thresholds – Ecosystem Resilience and Adaptation) in consultation with the largest possible diversity of scientists.  In Jan. 2012 leaders of the five programme proposals met to maximize interconnections among the life, physical and geosciences.  The proposals were submitted in Apr. 2012 and positive reviews were received in June 2012.

EG-Human Biology and Medicine has merged with its COMNAP counterpart and now has Draft membership, mission and science statements. It is currently researching and/or advising on: aliens in food, infectious diseases, telemedicine, Antarctica as a space analogue, Lyme Disease, vitamin D deficiency, a common summer medical standard and electronic health records.

EG-Continuous Plankton Recorder and the SCAR Southern Ocean CPR Survey now involves over a dozen countries and completes 45-50 tows/yr.  By the end of 2012, its database will comprise 36,000+ records, equalling 180,000 nautical miles of survey from nearly 650 tows.  A major finding this year was of a bloom of warm-water associated Noctiluca 242 km further into the Southern Ocean than previously known.  This dinoflagellate causes “red tide” and is a competitor of copepods, which are essential food for many top predators in the Southern Ocean.

EG-Birds and Marine Mammals has participated in the long-term effort of collecting and compiling data for several databases: The references database (3450 references concerning 102 SCAR species), the Synthesis of Antarctic Tracking Data (collaborating with CCAMLR and Birdlife International), the Penguiness Book database (outreach for the general public) and the Census of Antarctic Marine Life database (436 699 at-sea sightings comprising 244 866 bird sightings, 178 480 seal sightings and 13 353 cetacean sightings).  Products planned are a CCAMLR report on biodiversity of the d’Urville Sea (East Antarctica) and The Biogeographic Atlas of the Census of Antarctic Marine Life.

AntEco and AnT-ERA deal with the most topical and societally important questions of this century and have close interconnectedness with SOOS and ICED as well as with the other proposed SCAR SRPs, especially AntClim21 and SERCE.  They will propel SCAR forward as the leading advisory organization on the Antarctic.  ANTABIF is the prime focal point for data from these LS programmes as well as from CAML, EG-CPR and EG-BAMM.  These groups are in turn essential for the success of SCAR and provide important advice and support to CEP and CCAMLR.  The JEG-HB&M is an important resource and advisor for both SCAR and COMNAP.  All groups mentor the next generation (within and outside APECS) and provide outreach, especially via ANTABIF and APECS.  They also provide insight, data and linkages to the Arctic Science community through IASC.