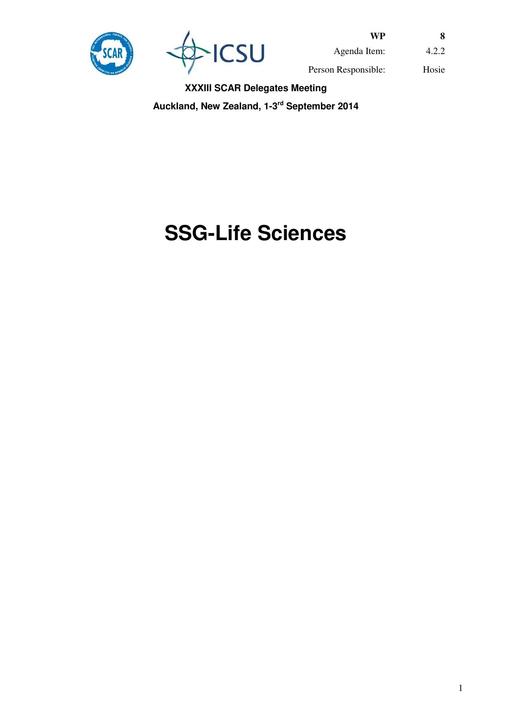 Introduction/Background: SSG-LS is primarily responsible for four Expert Groups and two Action Groups. SSG-LS shares five groups with SSG-PS. EG-ABI continues to build on the legacy of SCAR-MarBIN and CAML with the enhanced Antarctic Biodiversity facility biodiversity.aq. It is developing a dynamic online version of the Biogeographic Atlas of the Southern Ocean (dBASO) and Microbial Antarctic Resource System (mARS), a dedicated facility for microbial diversity data and metadata. EG-BAMM has been strengthening links with EG-ABI, APECS and the new Remote Sensing AG. BAMM and Remote Sensing will increase our capacity to monitor bird and mammal populations and species by using satellites to count animals. The new Retrospective Analysis of Antarctic Tracking database (RAATD) is a joint SCAR/CCAMLR project that will contribute significantly to conservation planning and management. EG-CPR continues to expand the SO- CPR Survey with South Africa, France and Brazil now involved. Korea, India, China and Peru are developing their programmes. Analysis CPR database shows significant increases in zooplankton abundance and shifts in species dominance in the eastern Antarctic Sector. The SCAR-COMNAP JEGHBM has enhanced tele- medicine and tele-health as a high priority, as well as applied research facilitating international collaboration and policy. The Ocean Acidification AG plans to release its report in June 2015 at ATCM. Reports for ICED, ATHENA and ECA are contained in the SSG-PS WP07 report.

Important Issues or Factors: A new observing system is being proposed “Antarctic Near-Shore and Terrestrial Observing System (ANTOS)”. This is a cross-disciplinary project involving all three SSGs. An Action Group is proposed to development the Implementation Plan. Another Action Group is proposed on “Integrated Science for the Sub-Antarctic (ISSA)” to reinvigorate interest in the sub-Antarctic and to facilitate the development of a strategy for future research. Full proposals are attached.

We request the Delegates to approve:

Partners: ANTOS and ISSA will involve all SSGs, and work with the new SRPs, plus SOOS, CEP, CCAMLR and national programmes