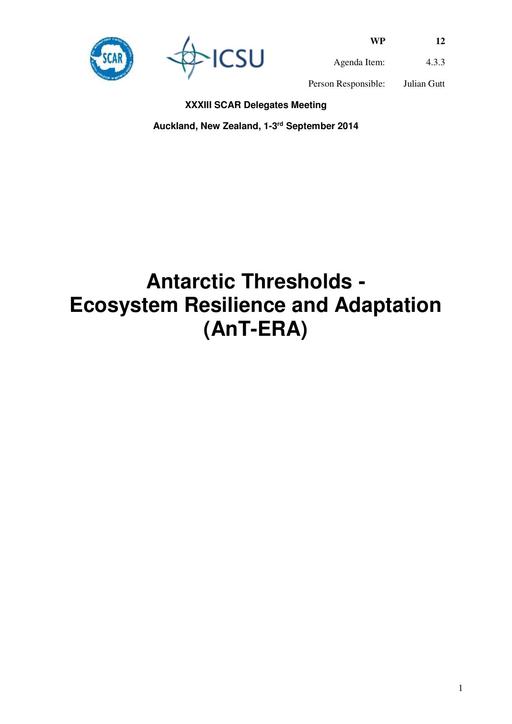 Authors:  J. Gutt and members of the Steering Committee

Introduction/ Background:
The first half of 2013 was devoted to a preparatory phase. As a consequence, AnT-ERA's launch in July 2013 was easy and smooth. During a constituent session at the SCAR Biology Symposium the Steering Committee (SC) prepared a first phase documentation of AnT-ERA projects and accomplishments and presented these to the SCAR biology community. The discussion was dominated by the key research aims, outreach, support for scientific work and early career scientists as well as cooperation with other international and national programs.

Important Issues or Factors:
Because the preparatory phase was intensive and included the development of an implementation plan and outreach activities, the start of AnT-ERA has, thus, been straightforward. This success was based on the composition of the SC, which comprises early career and experienced scientists as well as representatives from all continents, who are well integrated in a broad variety of AnT-ERA's research fields and other international and national programs. The smooth start of AnT-ERA also benefitted from the experience of some members with committee work such as in predecessor programs (EBA, EVOLANTA, RISC, EASIZ).

Recommendations/Actions and Justification:
AnT-ERA represents a large community of active scientists focusing on biological processes in the Antarctic, which are most probably affected by climate change. Promoting the understanding of thresholds and ecosystems responses to it is therefore urgent and important. The quality of the research projects benefits from intensive exchange of ideas and experiences for which SCAR provides the best and broadest platform. We request support in the coordination, dissemination and exchange of information by SCAR beyond financial support, especially by the representatives of national programs, SCAR's LSSG and secretariat, who can shape considerably the success of this new biology program, since AnT-ERA lives not only from the work of the SC but also from contributions from the AnT-ERA community. In particular, assistance with the development and contributions to AnT-ERA's webpage under the umbrella of the SCAR webpage, as this will become an important tool for the exchange of information.

Expected Benefits/Outcomes:
As the main focus of AnT-ERA is science, our major output will be high quality scientific publications, promoting the integration of early career scientists, emerging national programs and interdisciplinary as well as international cooperation.

Partners:
The best cooperation at the SCAR level exists already with AntClim21 and AntEco. Nine months after the start of these programs success is foreseeable. HoweverYet, at this stage, it is too early to provide concrete evidence. Relationships with others, e.g. CCAML are under development.

Budget Implications:
The success of AnT-ERA is based around actions that do not require extra funds and those that demand the monetary help of SCAR. The coordination of research projects, including newly emerging programs can be best implemented by having the experts meet. Such joint workshops as well as facilitating participations of early career scientists in various SCAR and non-SCAR workshops depend on future funding.