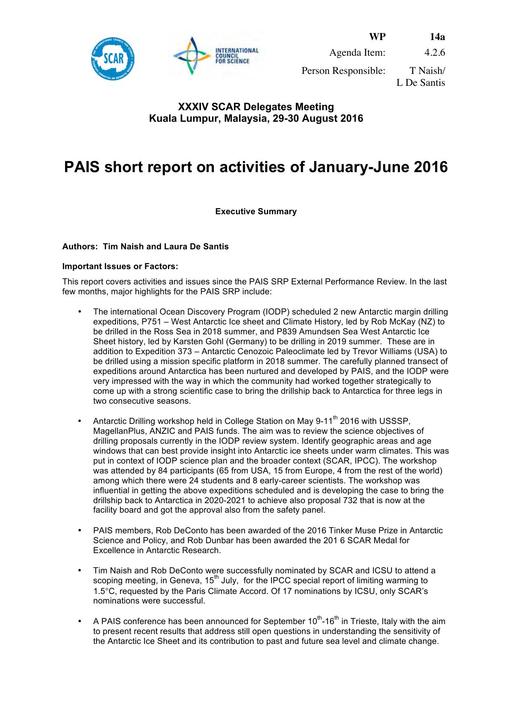 Important Issues or Factors: This report covers activities and issues since the PAIS SRP External Performance Review. In the last few months, major highlights for the PAIS SRP include:

The drilling ship the Joides Resolution, used by the IODP, is not an ice breaker and will need support from an ice breaker to secure its entrance and exit from the Ross Sea polynya in January-March 2018 and may need support in the Amundsen Sea continental shelf in January-March 2019. In the case of the Ross Sea and the Amundsen Sea, the ice breaker would not necessarily need to be close by the Joides Resolution for the entire length of the two drilling legs, but it will be needed for opening the passage and on standby for potential extraction. IODP have indicated that they would appreciate any ice breaker support SCAR COMNAP could provide. They have some budget for purchasing ice breaker support, but would also be looking for partnership with in kind support from another party.

SCAR EXCOM have endorsed a request to COMNAP to provide, in partnership with IODP, ice breaker support for the two scheduled PAIS-IODP expeditions to be drilled by the Joides Resolution in 2018 and 2019. Jeronimo Lopez will brief COMNAP at Goa meeting in August, 2016.

The long-term schedule indicates that the IODP drill ship will be back in the South Atlantic in 2020 with the potential to drill 732 on the peninsula and any other proposals that might be at the Facility Board for scheduling. It takes a minimum of 3 years to get a proposal to scheduling stage and there are a number of potential proposals in the Weddell and Scotia seas in the pipeline. This presents an unprecedented opportunity for the Antarctic community to have another 1 or 2 legs of scientific drilling in 2020-2021.

Research being conducted and co-ordinated under the PAIS umbrella is having a major impact on policy relevant climate change science through IPCC, and is gaining major support from the IODP. Especially as the Antarctic contribution to future sea-level rise is considered a number one research priority (e.g. as articulated in a recent NRC/NSF study for setting research priorities for NSF Antarctic program).

The purpose of the PAIS Trieste meeting is to identify future priorities for Antarctic paleoclimate research within the context of the SCAR Horizon Scan and the anticipated needs of the IPCC AR6 process, which is now getting underway. PAIS researchers are well placed to make a major contribution to both the publication of relevant science but also as co-authors. An important requirement is that the SCAR SRPs and non-SCAR communities develop closer linkages as climate change is a unifying theme that will have consequences for both biological and physical systems. PAIS is attempting to do this through its scientific programme and invitations to the Trieste meeting. AntClim21 is also doing this through a workshop being held in Kuala Lumpur after the SCAR OSC.

PAIS funds to support the following in the rest 2016:

PAIS requires funds to support the following in 2017:

PAIS is attempting to carry forward ~$15K of funds into 2017 for the Trieste meeting, and is looking at other sources of sponsorship. Nevertheless, the range of activities planned for 2017 is going to put pressure on our budget and we request any additional increase to the 2017 PAIS budget that SCAR can afford.