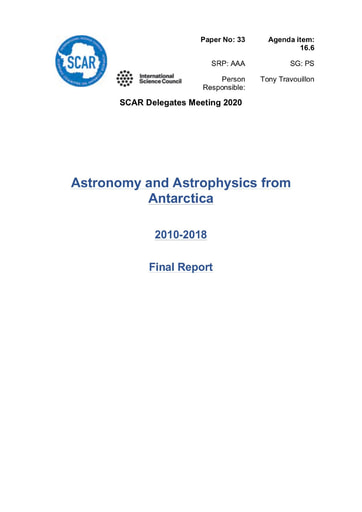 Introduction to the Program

The Astronomy and Astrophysics from Antarctica group (AAA). The group is led by a steering committee with representation from 9 countries. This program supports collaborations between astronomers using Antarctica as a platform to make observations of the cosmos that would be impossible from other locations on earth and at a fraction of the cost of operating in space. Astronomy is Antarctica represents over a thousand astronomers working with facilities located at 6 locations on the Antarctic plateau and spanning a wide spectrum of scientific specialties from cosmology to exoplanet searches. Facilities in Antarctica such as IceCube have played a central goal in the birth of “multi messenger astronomy” which has emerged over this decade.

During the second 4 years (2015-2018), SCAR AAA completed the Testing Site for the future ‘data portal’, convened and supported both a half-day science session and business meetings at the SCAR OSC in Kuala Lumpur and at POLAR2018 in Davos and held a 3-day meeting in Chiang Mai, Thailand.

ASTRO Sciences seeks the endorsement of SCAR AAA efforts which would maintain momentum of the AAA community, entice new SCAR member countries with AAA opportunities and spur increased coordination and reduce redundancy of equipment on the plateau.