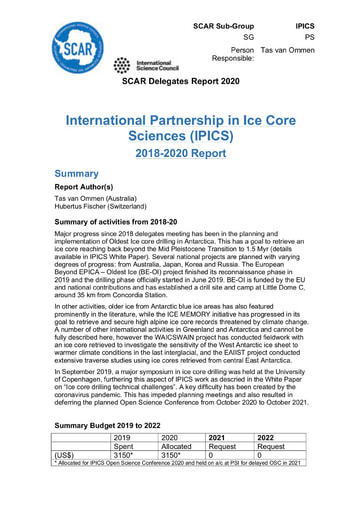 Major progress since 2018 delegates meeting has been in the planning and implementation of Oldest Ice core drilling in Antarctica. This has a goal to retrieve an ice core reaching back beyond the Mid Pleistocene Transition to 1.5 Myr (details available in IPICS White Paper). Several national projects are planned with varying degrees of progress: from Australia, Japan, Korea and Russia. The European Beyond EPICA – Oldest Ice (BE-OI) project finished its reconnaissance phase in 2019 and the drilling phase officially started in June 2019. BE-OI is funded by the EU and national contributions and has established a drill site and camp at Little Dome C, around 35 km from Concordia Station.

In other activities, older ice from Antarctic blue ice areas has also featured prominently in the literature, while the ICE MEMORY initiative has progressed in its goal to retrieve and secure high alpine ice core records threatened by climate change. A number of other international activities in Greenland and Antarctica and cannot be fully described here, however the WAICSWAIN project has conducted fieldwork with an ice core retrieved to investigate the sensitivity of the West Antarctic ice sheet to warmer climate conditions in the last interglacial, and the EAIIST project conducted extensive traverse studies using ice cores retrieved from central East Antarctica.

In September 2019, a major symposium in ice core drilling was held at the University of Copenhagen, furthering this aspect of IPICS work as descried in the White Paper on “Ice core drilling technical challenges”. A key difficulty has been created by the coronavirus pandemic. This has impeded planning meetings and also resulted in deferring the planned Open Science Conference from October 2020 to October 2021.