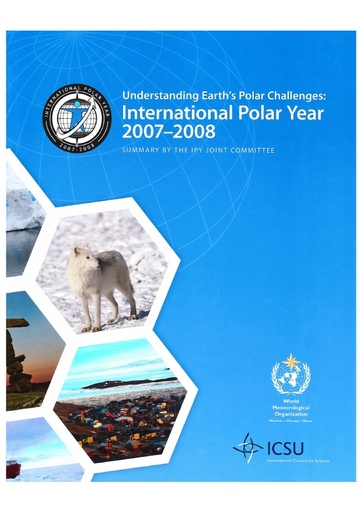 This document puts together sections of this report that are provided separately on the website of the International Council for Science (ICSU).

The International Polar Year (IPY) 2007–2008 co-sponsored by ICSU and WMO became the largest coordinated research program in the Earth’s polar regions, following in the footsteps of its predecessor, the International Geophysical Year 1957–1958. An estimated 50,000 researchers, local observers, educators, students, and support personnel from more than 60 nations were involved in the 228 international IPY projects (170 in science, 1 in data management, and 57 in education and outreach) and related national efforts. IPY generated intensive research and observations in the Arctic and Antarctica over a two-year period, 1 March 2007–1 March 2009, with many activities continuing beyond that date.

IPY 2007–2008 involved a large range of disciplines, from geophysics to ecology, human health, social sciences, and the humanities. All IPY projects included partners from several nations and/or from indigenous communities and polar residents’ organizations.

IPY 2007–2008 included education, outreach, and communication of science results to the public, and training the next generation of polar researchers among its primary missions. It broadened the ranks of its participants and the diversity of their products and activities to an extent never realized or even envisioned in the earlier IPYs. It reached out to many new constituencies, including polar residents, Arctic indigenous nations, and millions of people on the planet with no direct connection to the high latitudes.

IPY 2007–2008 generated a much anticipated ‘pulse’ (momentum) in the form of substantial new funding for polar research and monitoring programs, new observational and analysis technologies, integrated system-level approaches, and a broadened circle of stakeholders. It introduced new research and organizational paradigms that will have a lasting legacy of their own. It showed the power of integrative vision, and consolidated a new transdisciplinary approach that now includes biology, human health, social sciences, and the humanities, in addition to meteorology, glaciology, oceanography, geophysics, geology, and other traditional polar research fields. It sent a powerful message about the societal value of advanced research into rapid environmental change across the polar regions.

The ICSU-WMO Joint Committee for IPY produced this preliminary summary of the IPY activities in which the Committee, its direct predecessors, the IPY International Programme Office, and associated teams were directly involved. The volume of 38 chapters in five parts (Planning, Research, Observations, Outreach, and Legacies), covers the development of IPY 2007–2008 for almost a decade, from 2001 till summer 2010. It has engaged almost 300 contributing authors and reviewers from more than 30 nations. This broad overview of IPY 2007–2008 demonstrates the extensive and essential contribution made by participating nations and organizations, and provides a prospective blueprint for the next IPY.

IPY 2007–2008 contributed to the theoretical and organizational strengthening of polar research, and advanced our understanding of polar processes and of their global linkages. Large-scale baseline data sets were established in many fields, against which future change can be assessed. Novel and enhanced observing systems were launched that will eventually produce long-term benefits to many stakeholders. Last but not least, IPY 2007–2008 trained a new generation of scientists who are determined to carry its legacy into the future.