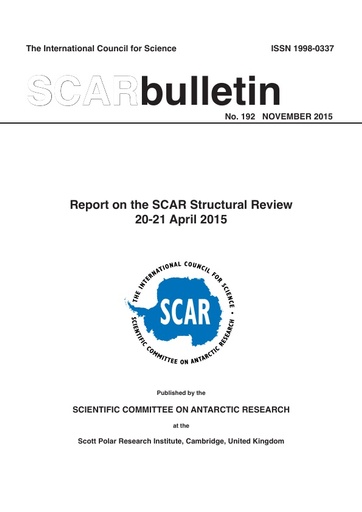 The SCAR Structure Review Group (RG) solicited input from the SCAR community via an online survey. Over 100 survey responses were received. The Structure Review Group met for a two-day period in April 2015. The current structure of SCAR science groups was reviewed and some models from other science groups were considered. A summary of survey responses was presented and discussed. The group then reviewed, in turn, the Standing Scientific Groups (SSGs), including the structure of their subsidiary bodies, Scientific Research Programmes (SRPs), Standing Committees and Advisory Groups and other groups (Humanities, Social Sciences), the SCAR meeting structure, and operation of the SCAR Secretariat. A summary of key points and recommendations from the Review Group discussions is provided below.