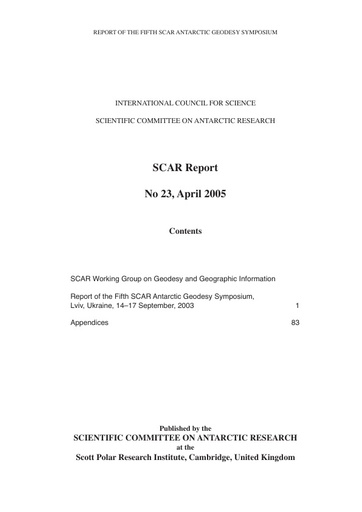 This fifth SCAR Antarctic Geodesy Symposium (AGS03) was held at the University “Lviv Polytechnic”, Lviv. It was attended by 38 participants, which included repre- sentatives of nine SCAR countries. (See list of attendees in Appendix 1).

The program included 36 presentations and a GIANT Business meeting (see Program in Appendix2). It contained a strong focus from Ukraine and Polish scientists on atmospheric studies related to GPS. Dr Milinevsky presented the history and status of the tide gauge at the Faraday/Vernadsky Antarctic station which was installed in 1947 and provides an important record of long term sea level variation due to climate change.

Professor E Dongchen from China confirmed in his paper that Interferometric Synthetic Aperture Radar is potentially a very useful technique to be utilized in Antarctica for measuring ice surface elevation providing it is well controlled with GPS positions.

Australia presented a background paper on the Evolution of the GIANT program, the recent field activity during the very successful Prince Charles Mountains Expedition of Germany and Australia (PCMEGA) and preliminary tectonic motions from their continuous GPS stations in Antarctica

Dr Mullins presented details of the status of development of continuous remote GPS stations by the United States in the Trans Antarctic Mountains, which are designed to run through the Antarctic winter.

Dr Schenke from the Alfred Wegner Institute, Germany, gave details of the coordination of Antarctic bathymetric data and the IHO project for coordination of data in the Southern ocean.

The symposium concluded with a GIANT business meeting. Dr Capra summarised progress against milestones of the program set during the XXVI SCAR in Shanghai in 2002. A joint proposal from Italy and Australia was endorsed to study and to improve the stability of the Terrestrial Reference Frame over Antarctica as the basis for precise measurement of small tectonic motion. The need to identify suitable projects for the International Polar Year 2007/2008 was noted. A proposal by Italy to host a further symposium in the series (2005) was unanimously endorsed.

It was a most a successful event which was extremely well hosted by the University Lviv Polytechnic and the Ukrainian Antarctic Centre.

Most participants provided final versions of their papers or abstract summaries and these are published in this report.