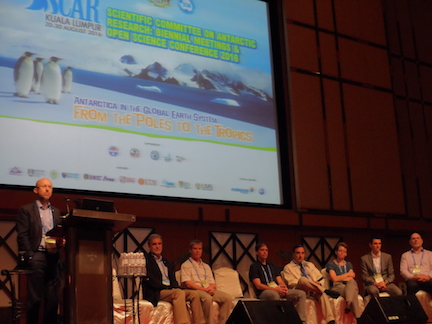 The Environmental Protocol’s 25th anniversary coincided with the Scientific Committee on Antarctic Research (SCAR) XXXIV Open Science Conference, which was held in August 2016 in Kuala Lumpur, Malaysia. A mini-symposium was organized at this conference by Dr. José Xavier (Portugal), Dr. Annick Wilmotte (Belgium), Dr. Kevin Hughes (United Kingdom) and Ms. Gabriela Roldan (New Zealand) entitled “Linking Antarctic science with environmental protection: celebrating the 25th anniversary of the Madrid Protocol”. The mini-symposium aimed to highlight the importance of the research carried out by the Antarctic science community under SCAR, to the Antarctic Treaty System (ATS), including the invaluable contribution of impartial scientific advice through the work of the Committee for Environmental Protection (CEP), particularly in environmental and conservation matters. Also, it revealed the intrinsic relationship between quality science and evidence-based policymaking. Furthermore, the presentations at the mini-symposium facilitated discussions on how Antarctic researchers can further engage with environmental issues of concern to the Antarctic Treaty System, along with identifying priorities in Antarctic policy that require quality science and effective communication between the science community and policy-makers.

The mini-symposium featured oral presentations from invited SCAR scientists, policy makers and members of the SCAR Standing Committee on the Antarctic Treaty System (SCATS). Prof. Jerónimo López-Martínez, in his role of president of SCAR at the time, greeted the expert guest speakers and the audience to begin the series of presentations.

Here is the list of the mini-symposium invited speakers and the titles of their presentations:

The video recording of the mini-symposium is available on YouTube.

See also the pdf transcript of the oral presentations (177 KB) .

The presentations were followed by a panel discussion session between the audience and the guest speakers, chaired by Dr Kevin Hughes. The conclusions of the mini-symposium were summed up by Dr Jose Xavier, and here are the key points: