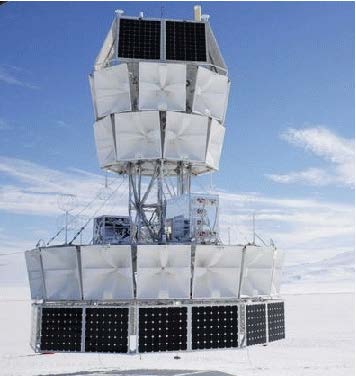 In a recent publication, Daniel García-Fernández and colleagues have used measurements from a balloon-borne antenna array to produce a cosmic ray flux spectrum. For the first time the spectra were produced using the radio technique exclusively, avoiding the need to carry e.g. plastic stacks to record cosmic ray tracks.

Their results were produced from the Antarctic Impulsive Transient Antenna (ANITA) experiment, which consists of an aerostatic balloon flying 37km above Antarctica and carrying a payload consisting of an array of radio antennas.

While ANITA was designed to detect the electric field of neutrino-induced showers in the ice cap, using data from the first 3 ANITA flights between 2006 and 2014, 16 radio pulses were detected coming from extensive air showers induced by cosmic rays, and these data were used to produce the cosmic ray flux measurements.

These measurements will help investigate the relationship between solar activity and cosmic ray flux as well as the role of cosmic rays in the chemistry leading to ozone depletion.

A further ANITA flight took place in December 2016 and results will be combined with those already analysed to investigate the origins of the observed cosmic rays.