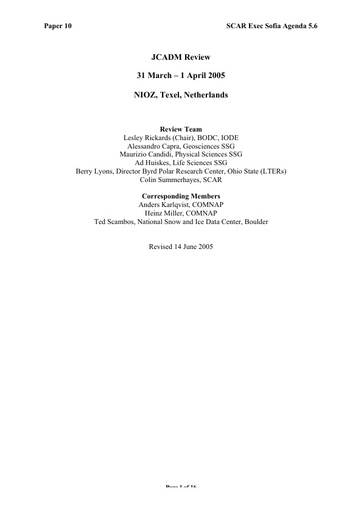 Between 31 March – 1 April, 2005, a six-person team (representing three SCAR SSGs and LTER) conducted a review of the SCAR/COMNAP Joint Committee on Antarctic Data Management (JCADM) for SCAR and COMNAP. Unfortunately, no COMNAP representatives were able to be present for the review meeting, but their comments on the draft report were sought through correspondence. In addition NSIDC were unable to attend, but noted that they take the work of the metadata archiving for Antarctica very seriously, and believe that it is an important international record of the scientific exploration of the continent. They further commented that they strongly believe that the activity needs to be strengthened and broadened, and links to actual data archives need to be expanded.

The Review Team was joined by Taco de Bruin (NIOZ), Chief Officer JCADM, and NADC manager for Netherlands for parts of the review meeting. He also provided a presentation giving an overview of JCADM and its activities, reviewing the JCADM ToRs and commenting on the Review ToRs.

The Review Team concluded the review with a generally positive evaluation of JCADM. The Review Team feels that JCADM performs a necessary function and should be continued. The Review Team judged that JCADM meets its Terms of Reference. The achievements of JCADM to date are noted in Section 4. The Review Team made a number of recommendations that should help to improve the performance of JCADM and its value to the scientific community and COMNAP (section 5).