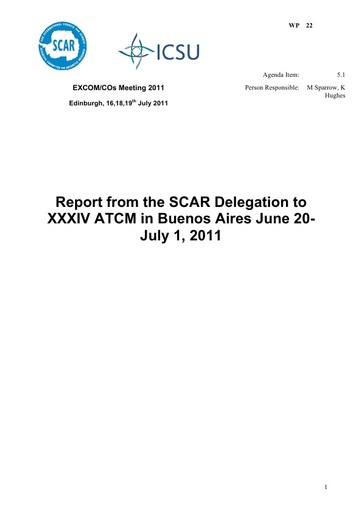 Introduction/ Background: This report summarises the SCAR contribution to the CEP and ATCM meetings held in Argentina in 2011.

SCAR's contributions to the XXXIV Antarctic Treaty Consultative Meeting (ATCM) were positively received. SCAR provided two Working Papers (WPs) and nine Information Papers (IPs). Many of these were joint with other Observers (COMNAP) and Parties (Australia).

The Antarctic Climate Change and the Environment (ACCE) report and updates formed a major part of the ongoing discussions of the Committee for Environmental Protection (CEP) and the ATCM. Two Parties (UK and Norway) and one Observer (ASOC) have committed to providing funds to communicate SCAR’s climate related activities.

Many parties were interested in progress with the Southern Ocean Observing System (which was presented both at CEP and at the ATCM). The subject of marine acoustics came to the fore again and SCAR agreed to provide a literature update to its last report to inform parties.

The spread of non-native species is still a major topic of discussion in the CEP. SCAR provided several papers on this subject and agreed to moderate an Intersessional Contact Group.

In response to a request from the CEP in relation to environmental issues related to the practicality of repair or remediation of environmental damage, SCAR iterated that it would be happy to provide advice to the CEP on this topic if specific scientific questions were raised.

SCAR presented two new Codes of Conduct on the Exploration and Research of Subglacial Aquatic Environments and for the Use of Animals for Scientific Purposes in Antarctica.

The SCAR Lecture this year on “Detecting the Imprint of Humans on Antarctica: A Case Study" was based around the long-term environmental monitoring programme at McMurdo station. The lecture was well received, with many questions from the audience.

Meetings with CCAMLR, COMNAP and other Parties were held in the margins of the meeting, helping to improve and cement our working relationship with partner organisations.