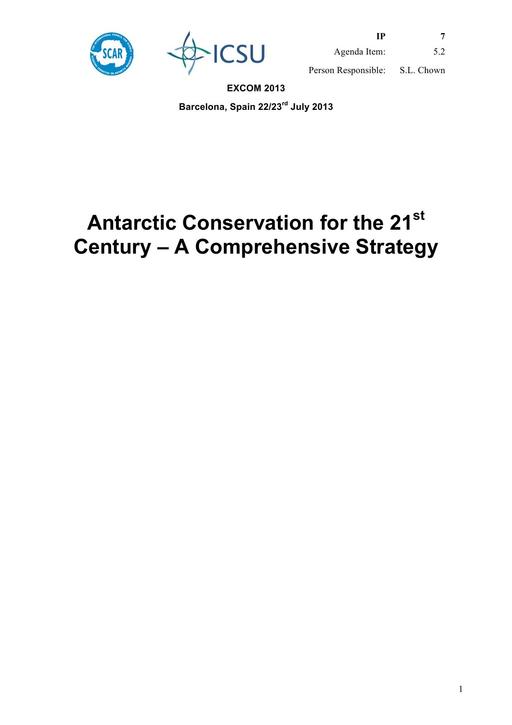 Introduction/ Background: In recognition of growing use of and environmental threats to Antarctica, as well as something of a piecemeal approach to SCAR concerning various conservation threats, a proposal was made to the SCAR Delegates for a major activity to develop a Conservation Strategy for Antarctica. The last comprehensive approach was the IUCN/SCAR Antarctic Conservation Strategy that predated the Protocol on Environmental Protection to the Antarctic Treaty.

Important Issues or Factors: A comprehensive modern, evidence-based strategy for Antarctic Conservation is not available. This is a substantial problem for conservation of the continent based on the best science. Development of the strategy will also identify knowledge gaps that SCAR could help fill as part of its vision to re-assert international leadership in Antarctic science.

Budget Implications: Through its partners, SCAR has managed to leverage substantial funding. This has included contributions from New Zealand and South Africa, as well as personally from S.L. Chown from Martha T. Muse award funds for the 2011 Antarctic Conservation Horizon Scanning Meeting, and has further obtained contributions from Antarctica New Zealand and COMNAP for the development of the strategy and for additional workshops. An amount of $ 100 000 is committed for 2013 and a similar amount for 2014. Most of these funds (c. $ 90 000 p.a.) have been leveraged from outside organizations.