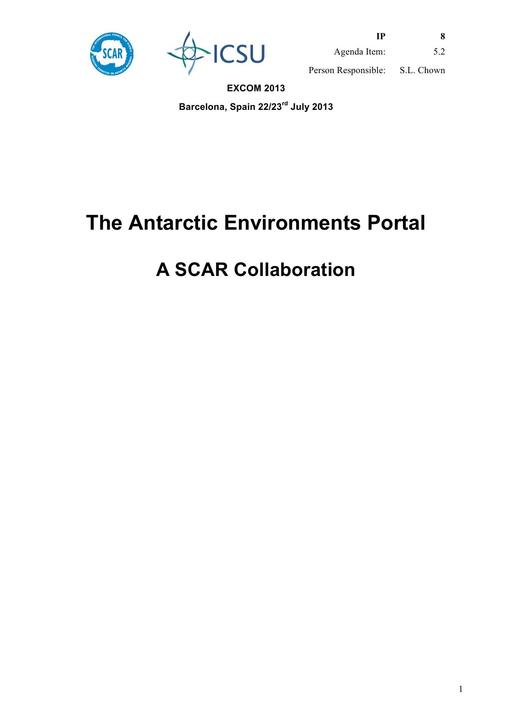 Introduction/ Background: The Committee for Environmental Protection (CEP) is charged with providing advice to Antarctic Treaty Consultative Meetings (ATCMs) on the implementation of the Environmental Protocol, including minimizing or mitigating environmental impacts of activities in the Antarctic Treaty area, the state of Antarctic environments and the need for scientific research related to the implementation of the Protocol. SCAR in turn provides advice to the CEP, often in collaboration with Parties to the Treaty, about key scientific advances that have policy implications.

Important Issues or Factors: SCAR, New Zealand, and Australia see that there is a pressing need to improve the availability of, and access to, scientific syntheses and high quality information to inform decision-making to support the effective implementation of the Protocol. The Environments Portal being developed primarily by New Zealand is a vehicle to do just that.

Recommendations/Actions and Justification:  SCAR continues its involvement, through SC-ATS, with the Portal as a primary mechanism for delivering science advice to the Treaty.

Expected Benefits/Outcomes:  A vehicle to give additional effect to SCAR’s vision of re-establishing its pre-eminence as a scientific advisor to the Antarctic Treaty System (in keeping with the 2011-2016 strategic plan) in a cost effective manner, and which leverages the benefits of significant partnerships.

Budget Implications: SCAR has already committed US$ 10 000 to the Portal via SC-ATS. The budget expectations for 2013 and 2014 are in the order of $ 2 500 p.a. for travel. Most of the major costs will involve time from SC-ATS (through Monash University) as part of the Conservation Strategy work.