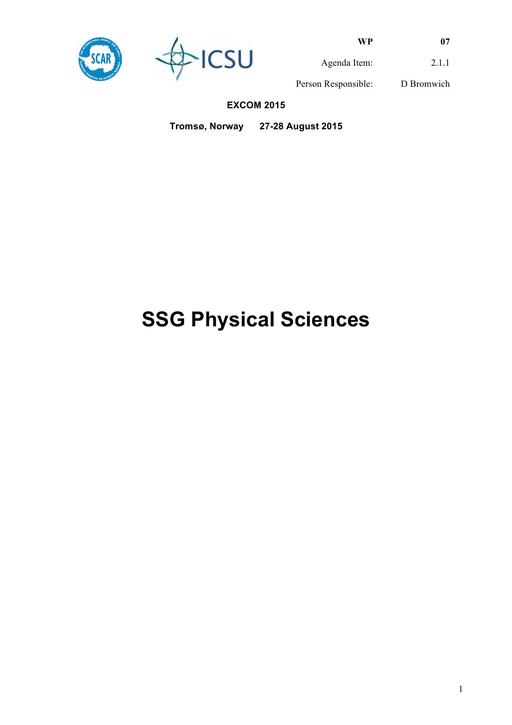 Introduction/Background: SSG-PS is responsible for 5 EGs (1 joint), 6 AGs (2 joint), and 2 Scientific Research Programs (SRPs). During 2015 it also partially funded the ACCE advisory group. EGs ASPeCT, GRAPE, IPICS, ISMASS, and OpMet have many ongoing activities, with IPICS preparing for a major international conference in 2016. Ocean Acidification and PACT are winding up their activities in 2015 or so and publications are expected. AG SERAnt wants to become an EG at the upcoming SCAR Open Science Conference. AG SnowAnt is active in particular with snow schools in Europe. AG ACA is promoting field programs aimed at fixing large errors in atmospheric models over the Southern Ocean. Reports are also included for the ACCE advisory group and the AAA SRP, but not the AG on Remote Sensing that is covered by SSG-LS nor the AntarcticClimate21 SRP that is covered by WP13.

Important Issues or Factors: The AG on Ocean Acidification is seeking input on where to release its major report by the end of 2015.

Partners: SSG-PS will continue to work with a wide variety of partners both within and external to SCAR

Budget Implications: No new funding has been requestedthrough the end of 2016. Spending of existing allocations has been slow but this is usual practice. All allocated SSG-PS funds that have not been expended or explicitly targeted for spending by end of June 2016 will be redistributed to more worthy applications, most likely participation in the 2016 SCAR Open Science Conference in Kuala Lumpur.