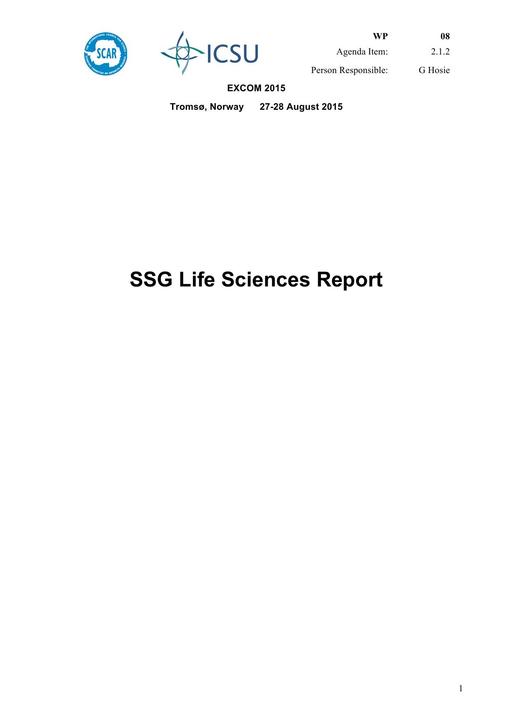 Introduction/Background: SSG-LS is primarily responsible for four Expert Groups and four Action Groups. SSG-LS shares two AGs with SSG-PS, these being Remote Sensing and Ocean Acidification, although all groups actively seek multi-disciplinary activities with SSG-PS and GS groups. EG-ABI and EG-BAMM have been working together on a joint analysis of the Retrospective Analysis of Antarctic Tracking database (RAATD). This has produced a very large standardised tracking data set for 14 species of bird and marine mammals which can be used for preliminary modelling and characterisation of Areas of Ecological Significance (AES). This work will of considerable interest to CCAMLR. EG-CPR recently completed a major methodology and taxonomy training workshop for personnel involved with the South African CPR programme in Antarctica and the Southern Ocean CPR Survey. A similar training workshop is being developed for India to develop their contribution to SO-CPR and SOOS. The CPR dataset is a SCAR Business Product which is widely used. Remote Sensing AG works closely with EG-BAMM and EG-ABI to monitor bird and mammal populations and species by using satellites to count animals. Remote Sensing has been working on rules for the use of drones (UAV) over penguin colonies. Action Groups ANTOS and ISSA were established last year in Auckland, SCAR XXXIII. Both AGs having major planning workshops scheduled for August 2015 and January 2016, respectively.

Important Issues or Factors: none

Recommendations/Actions and Justification: No recommendations or actions have been received from any EG or AG.

Partners: SSG-LS and its AG/EGs continue to work with groups with SCAR such AntEco, AnT-ERA, SSGs, SCATS, those allied with SCAR, e.g. SOOS, those of the wider Antarctic community such as CCAMLR and CEP, and groups outside of Antarctic such as the Global Alliance of CPR Surveys (GACS) and SCOR.

Budget Implications: No extra funding has been requested above the allocations already provided. Spending to date has been slow, which is not unusual early in the biennial funding period.