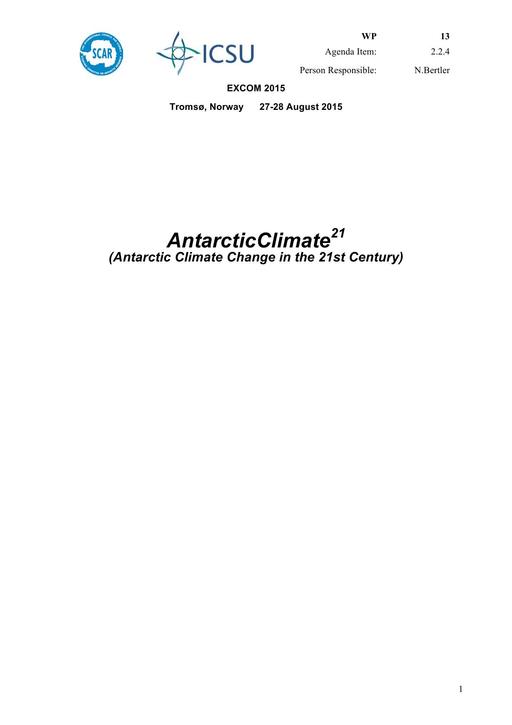 Introduction/ Background: The overarching question of this research initiative is: How will the Antarctic / Southern Ocean environment change over the 21st Century? To achieve this goal, AntarcticClimate21 focuses on three themes of research:

To understand the significance of recent trends in the context of natural variability, we consider changes on a multi-century time scale that are relevant to improve climate projections, the attribution of the causes of environmental change, and the skill of earth system models in the Antarctic / Southern Ocean region.

Important Issues or Factors: AntarcticClimate21 successfully achieved important milestones for objectives 1 and 2 over the past 12 month. We published the conclusions from our first workshop addressing Objective 1 “Quantification of Antarctic Climate Variability’. Morever, we held our second workshop focusing on Objective 2 – Climate model verification for the Antarctic region, and published recommendations for a standardized approached for testing and reporting climate model experiments for CMIP6. In addition, we contributed to an AnT-ERA led publication on the first assessment of the cumulative impact of climate change stresses on the Antarctic ecosystem and contribute and co-sponsor to the first AnT-ERA / AntEco / AntarcticClimate21 workshop to improve our understanding of the vulnerability of the Antarctic / Southern Ocean ecosystem to current and future global change. Finally, the approval of the NSF supported Southern Ocean Carbon and Climate Observations and Modeling (SOCCOM) program (co-led by Prof. J.Russell) catalyzes our efforts especially to improve the modeling skill for oceanographic processes.

Recommendations/Actions and Justification AntarcticClimate21 represents a large and growing community of active scientists working to improve future projection of Antarctica’s role as driver of and its response to global change. We request the SSGs and SCAR Delegates to approve continued support for AntarcticClimate21. The outcome of this SCAR initiative will provide important leadership to improve modeling capability for future projections in time for inclusion in the IPCC AR6, it seeks multidisciplinary collaboration between existing SCAR initiatives, encourages new international research efforts, engages proactively in the development of the new generation of CMIP6 experiments, and promotes the integrates early and mid-career scientists.

Expected Benefits/Outcomes: The principle aim of AntarcticClimate21 is to provide realistic, data-constrained future projections for the next century and beyond, and to support SCAR’s leadership in Antarctic research and policy advice.

Budget Implications: We kindly request that AntarcticClimate21 is permitted to use $3k from our 2016 budget during 2015 to accommodate publication fees not included in the 2015 budget.